Where to jump, throw and run: 3-word addresses for athletics 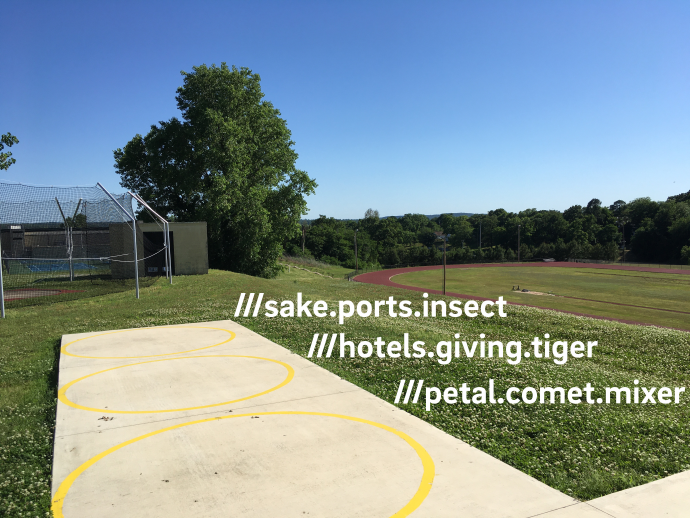 We want to make it easier for athletes, fans and coaches in athletics. The first way we’re going to do that is making it easier to find a place to jump, throw or run.

Have you ever used a half-decent throws circle at a high school track, the one within the oval, and only after a few weeks realized that the new ones are on the top of the hill overlooking the track? Maybe you’ve competed at a stadium that has great facilities, spectator seating, lights, concessions and bathrooms, situated in a beautiful park… but since you’re a thrower or a pole vaulter, your friends and family don’t realize you’ve been tucked away on the far side, down a little slope facing the main road, so they can’t really watch you throw or jump without walking out around the track and standing huddled together instead of being in the seats they paid for. And don’t forget that one time you worked the hook-up to use a private school’s track & field facilities during the middle of the day, but your first practice there goes nowhere because the runway is mostly the lanes of a 5-lane track, so it’s no safer for your jumpers than for all the students who are absolutely everywhere.

Obviously, there’s no point in asking you javelin throwers out there if you’ve ever spent a weekend driving from one college track to the next, looking for one that you can sneak onto and throw since you probably don’t live in a state that “allows” high school javelin.

what3words is a London-based company that has given a unique 3-word address to every 3m x 3m square on earth. A few years ago, we realized that a lot of athletics happens in 3m x 3m squares. Throws circles, horizontal jump pits, high jump and pole vault landing pads can all fit snugly in a 3m x 3m square, as can a few lanes of the start or finish line of a track.

Instead of telling people to show up at a track or giving them the street address of a school, and then expecting them to wander around until they find the event facility they need and hope it was sufficient, people can give the 3-word address of every throw circle, jump pit and javelin runway. And to give a nod to the runners, we included the start line of lane 1.

Our map will eventually have the 3-word address for each individual place to jump, throw or start a run, well, anywhere, starting in the US and southern Ontario.

On our to-do list is opening up the map so you can help us build the AirBnb of athletics.

What we need from you is the places we’ve missed, and all the things you only know once you’re there. How long are the runways? Are there lights or bathrooms? Is the track rubber or asphalt, are the throws circles smooth and does the high jump landing pad have a smell you’d rather not land on? And of course, we’ll need some pics.

So instead of wandering around the Charles Page High School track in Sand Springs, OK, looking for the throws circles you’ve heard so much about, park your car atop the hill so you can walk right over to ///buyers.intent.dash. The next time you’re vaulting at the Terry Fox Stadium in Brampton, Ontario, let your fans know to skip their seats so they can watch you take flight over ///cobras.tulip.droplet. And before you tell your long jumpers to meet you at ///light.struck.broken at River Oaks Baptist School in Houston, Texas, make sure you don’t need too much runway for that day’s training.