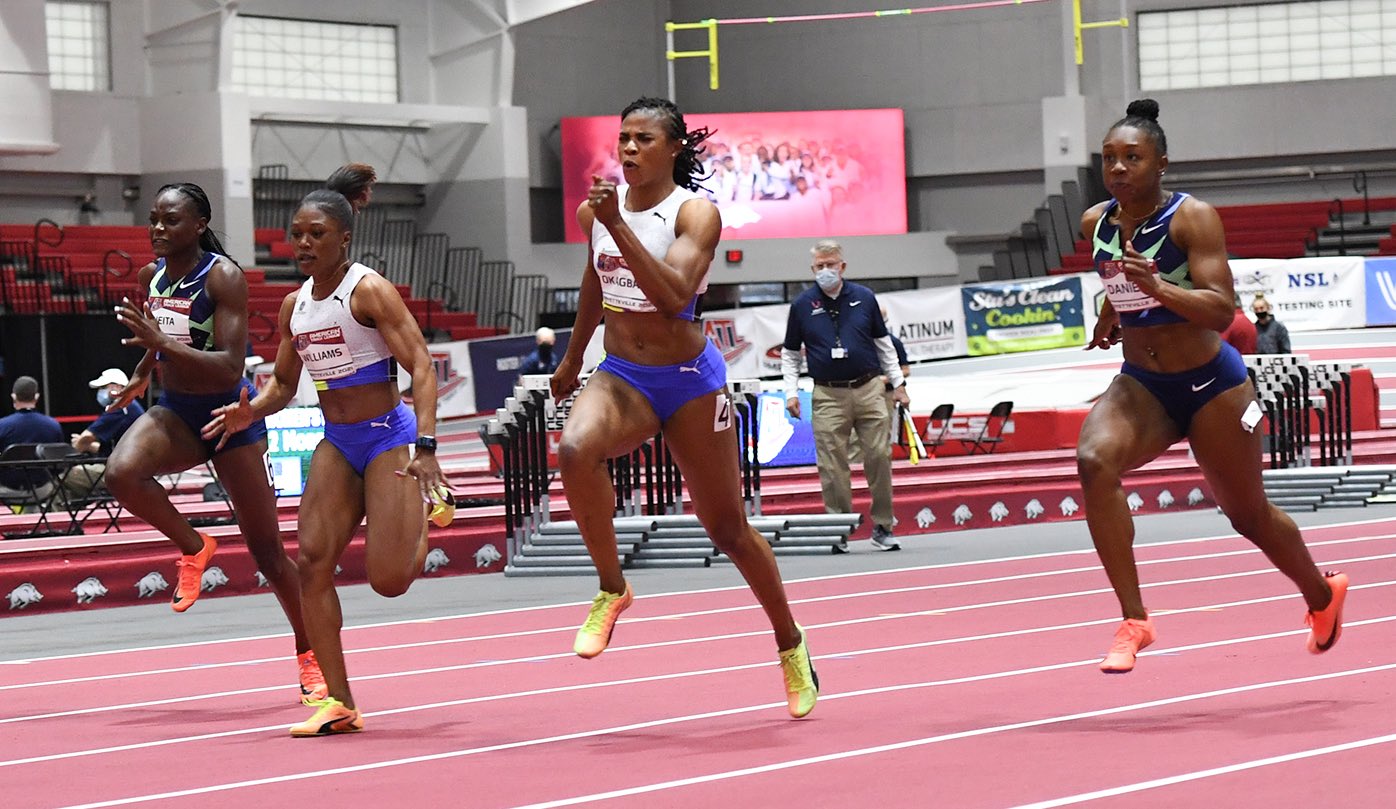 Almost the entirety of the US non-college indoor track & field season unfolded over the last five weekends at the American Track League and New Balance Indoor Grand Prix. Through those events, track & field popped its head out of its burrow and appeared on mainstream sports platforms.

This spurt of indoor track & field activity left us with a few questions. These are questions that are answered explicitly or easy to figure out for any mainstream sporting event.

After any standalone event or regular week in major sports, I can count on reading about such things in my usual list of sports industry sites. They are normal topics of conversation that often lead to interesting insights or perspectives, which can then shape future decisions and actions. That is to say, they report the status of the wheel so it does not have to be reinvented.

1. What were the ratings?

Since the Super Bowl was pretty much over after the first quarter, most of the banter and debate during the subsequent few days was about the ratings. The game brought in the lowest numbers in decades, which CBS was quick to amend by adding the number of streaming viewers to the initial reports that just covered TV viewers. Pundits and analysts pushed their theories over whether the low ratings were due to both teams being from small markets; the poor officiating early in the game; the foregone conclusion of the outcome before the not-up-to-standard-of-years-past halftime show; or ongoing tune-out due to athlete activism.

We’d happily have comparable conversations about the American Track League and the New Balance Indoor Grand Prix if we knew what their ratings were.

Did anyone listen, care and watch? Were the numbers higher than the previous iteration (2017-ish) of the ATL that was on ESPN3, or other years of the NBIGP? How did the ratings compare to other niche sports in the same time slots on other weekends? Is there a demographic breakdown that shows a nascent market for track & field fans?

Might fans be so starved for any live sports after a year of the coronavirus-induced shutdown that they’d even watch track & field?

Was viewership higher in states that legalized recreational marijuana?

UPDATE: The Sports Examiner published the ratings from the first three ATL meets and the NBIGP on Tuesday morning, noting that the ratings from ATL #4 won’t be available for another week. TSX also provided some comparison and context. Props, and another piece of evidence that TSX is among the most under-rated sports sites out there.

2. What was the nature of USATF’s “support” for the American Track League?

Other than the eight words in this tweet, what did the national governing body of track & field in the United States provide to the privately-owned American Track League? How did the meet, athletes, officials or venue benefit from it?

As an aside, we have an article in the hopper about the unique language used in track & field. Take a look at that tweet. “Pledge.” “Support.” That’s not the language of business. That’s the language of a charity, of a tax write-off, a telethon, a PBS fund drive minus the tote bags.

Maybe I just missed the tweet when Bud Light Seltzer Lemonade “pledged” to “support” the Super Bowl. More on this below.

Feel free to fact check us: Did the participating athletes receive a USATF tote bag?

3. What were the logistics of athlete travel and lodging?

Athlete logistics were more of a story in the broader sports world over the last eight months than they ever should be. Logistics and its sibling, finances, are always major factors in track & field athletes’ season planning. So how did they work for the multi-week American Track League? Did athletes competing in consecutive meets stay in Fayetteville, AR, for the week? If so, were they at hotels? Home-stays? AirBnB’s? Those all get very expensive in a sport that has no money, so were these covered by the meet, donor (ahem) support, or the athletes’ sponsors? Or out of the athletes’ pockets, as so much of the sport is (that which isn’t ahem supported)?

We’re not asking this to be Karens and get all up in the ATL over bubbles and masks.

There’s a chance someone will want to present a track & field meet, or some other event in a minimally-funded niche sport, before the coronavirus-related restrictions are lifted. They would benefit from knowing how other events pulled it off.

Track & field has a decades-long tradition of siloing information, which leads to wheel reinvention several times per generation. Sharing a few lessons learned could give a traditional track meet a greater legacy than anything they ever do for the athletes, fans or communities; and it could make track & field worth watching for professionals in other sports.

4. How did the sponsors activate in the absence of fans?

For those who are interested in such things, this year of sports in empty stadiums has forced teams and brands to come up with new ways to connect with the fans they would otherwise reach through their in-stadium activations. Particularly for sports where the in-person fans are the vast majority of the fans watching (i.e., those without a lot of home viewers: minor leagues, niche sports, etc), there’s been a solid display of creativity.

On Running sponsored the women’s 400m at the second American Track League meet. This seems incongruous since On Running does not make spikes and the ATL took the unusual step of listing athlete affiliation by country and not sponsor. Did On even have any On-sponsored athletes in the race, perhaps someone who trains in On when not wearing spikes? Were On athletes elsewhere in the meet? Regardless, what did On get out of what they put in?

What did the professional athletes who put their names on events get out of it? Did they “support” the events or sponsor them? Easy way to tell the difference: if they got something out of it beyond a warm fuzzy and seal-clapping approval, it might have been a sponsorship. We’d have to know what the desired return was (either return on investment or return on objective, we’re not picky). Otherwise, if no desired return: support. If they approached Paul Doyle intending to sponsor the event and not just donate to it, how did they activate on it?

Another easy way to tell if it’s support or sponsorship: how many times does the word “thank” show up in the announcement? Anything non-zero is a good sign of support, and anything over one is definite support. And this one clocks in at four.

The fourth meet at the American Track League had the most named events. Were they actually sponsored, or were they supported? What do the training group, training app, 501(c)3 and coaches’ group that bought the names of events plan to get out of their spend, and what did they do and what will they do to pursue that return?

And what of the lone non-endemic company to put their name on an event? As of the morning after the meet, Zenni Optical has not mentioned their involvement on Instagram, Facebook or Twitter.

As much as we hate repetition, we’re going to repeat what we said up top in order to preempt the predictable: These are questions that every sports property can answer and does answer, explicitly or implicitly. We’re not hating by asking these questions or in our commentary. We’re holding track & field to the same standards that we hold every other sport and ourselves.

Track & field’s ability to escape its decades-long predicament hinges on its ability to recognize the validity of these and similar questions, answer them and then act on a clear-eyed assessment of those answers.

Unashamedly open plea to track & field coaches: Be an eagle