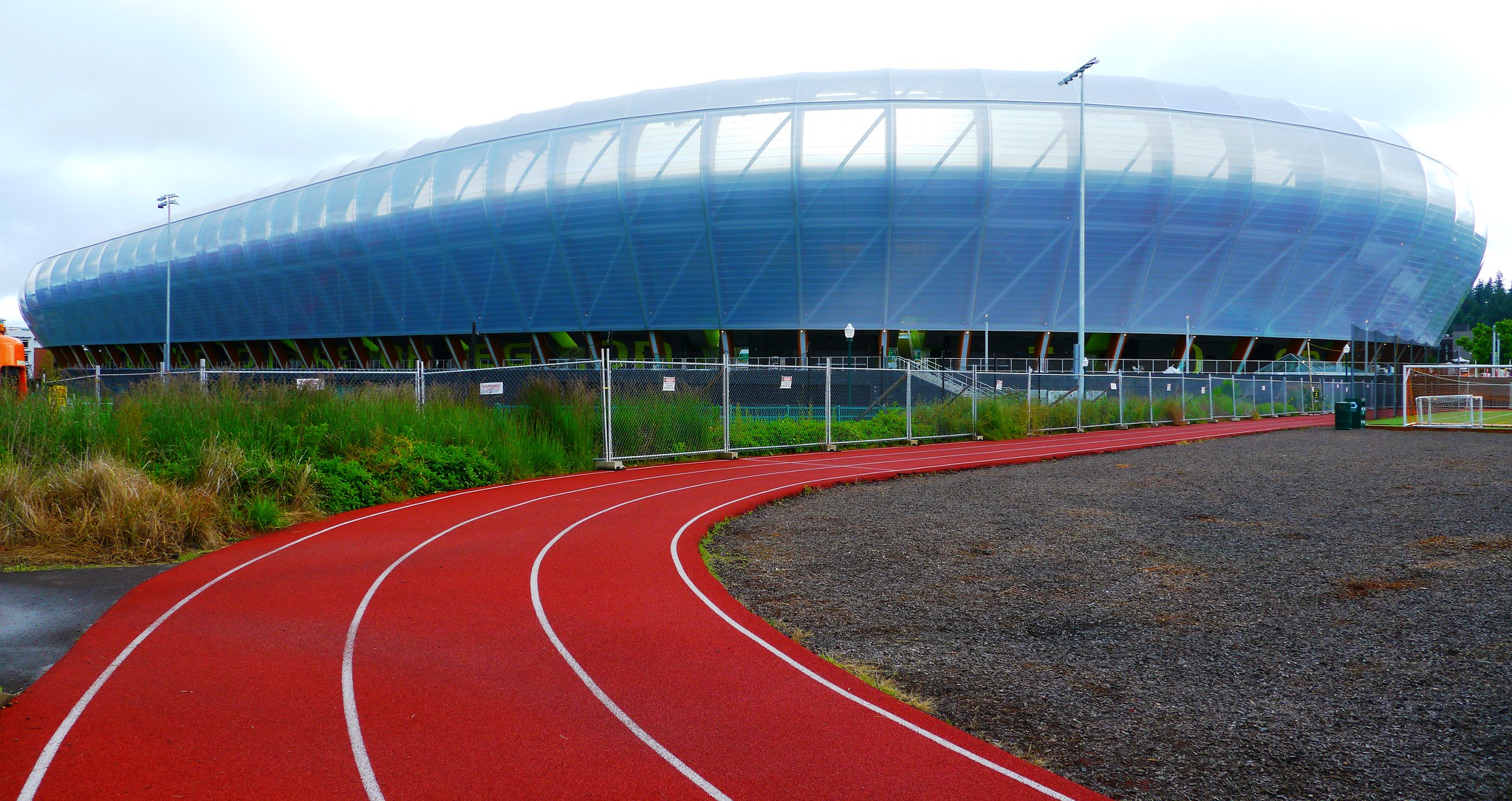 International students made up 30% of the top 10 finishers at the 2021 NCAA Outdoor Track & Field Championships. These athletes are a unique subset of the athletes we need to keep in the sport past graduation.

If not for COVID, we’d be at the point on the track & field calendar where people start asking “How can we keep more of the top American track & field athletes in the US for the summer, so they don’t have to go to Europe?” Since travel to Europe is still a coronavirus-induced pain and there’s not much going on over there for American athletes anyway, let’s put a twist on that old standby query:

How can we keep more of the top international track & field athletes in the US for the summer or longer? You know, the ones who are doing so well on American college track & field teams? In fact, how can we keep them in the US alongside their American teammates and opponents for their post-collegiate careers?

At the 2021 NCAA Outdoor Track & Field Championships, 332 athletes finished in the top 10 of the individual events (i.e., relays excluded). Just under one-third of them - 98 athletes from 39 countries - were international students. Europe had the largest contingent, with 39 student-athletes; followed by the Caribbean with 29 and Africa with 24. Eleven countries had an athlete atop the podium, but only one country had two: Thomas Mardel and Marie-Therese Obst of Norway won the hammer and javelin, respectively.

Jamaica had 19 top 10 finishers, the most of any non-US country. These athletes were more evenly distributed across the three “standalone” disciplines - 9 runners, 6 jumpers, 4 throwers - than any other country’s athletes. Kenya had 11 top 10 finishers, all of whom were runners. 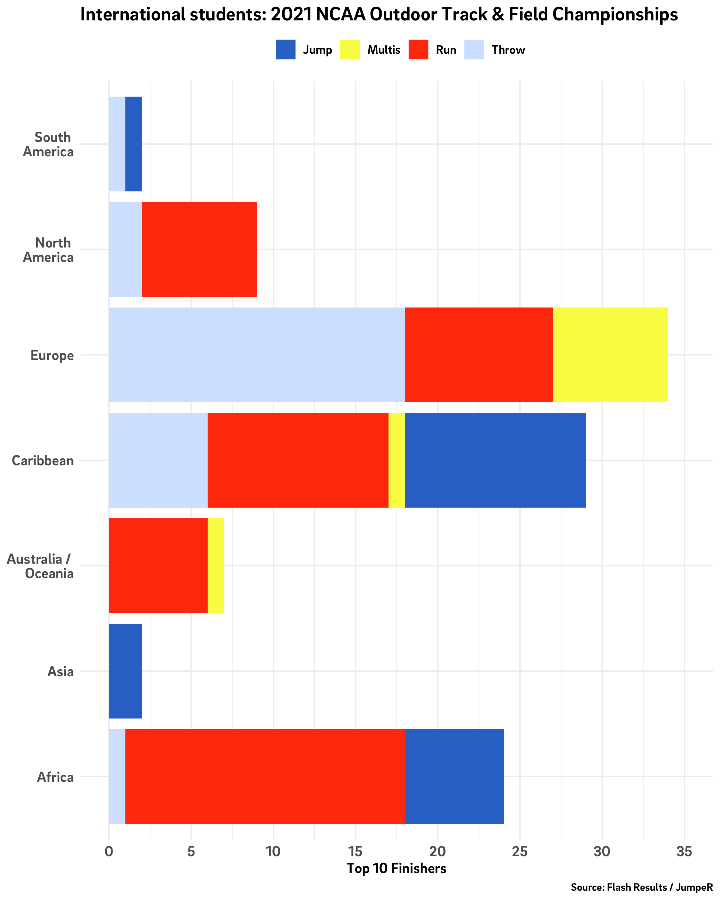 Europe dominated the throws and multi events among the international student-athletes. Europeans had three of the 20 spots among the heptathlon and decathlon, including three from Germany alone. and were 18 of the 80 top throwers. In addition to Mardel and Obst, Norwegian hammer throwers Beatrice Llano and Jon Nerdal finished fifth and seventh, respectively.

International track & field student-athletes occupy an interesting intersection of two of our motivating questions. First, how can we keep more track & field athletes in the sport after they graduate college? Second, as part answer to the first, what can we learn and import from the European sport model?

Our competitive and business models are based in large part on the European club system, not just in track & field but in all sports. The hurdles are more cultural - that is, the culture of track & field in the US - than commercial.

One of the easiest ways to see this is on social media. Go to Instagram and look at the social media feeds for European track & clubs and athletes. Not the tip top of the pyramid with the athletes who will be in Tokyo this summer, but the much broader base a small step or two below. For starters, there is a broad base a small step or two below! But look at how they are dressed: they’re all wearing club gear and club colors. Look at who else is in the picture: they are training and competing as teams. Look at where else their pictures are taken: they go out, hang out and maybe hook up after practice. Take a look at what you don’t see: you don’t see training tips, technical self-analyses, poses with some product that “sponsors” the athlete or the clichéd “DEAD!” pic of a runner sprawled on a track - all things you will see almost exclusively from the tip top of US athletes.

The pictures, the graphics, the captions, the hashtags from across the pond all convey sports.

GET STARTED: FIND A PLACE, THEN FIND THE PEOPLE

If aliens came down to earth and looked at the social media feeds of a swath of pro or semi-pro sports teams, European athletics clubs and athletes, American track & field clubs and athletes, and fitness influencers and hangers-on, they would group together the first two and the last two.

The most successful sports are ones that attract the most athletes able to compete at whatever level. Soccer is the global game not because it’s played everywhere, but because everyone goes anywhere they have to in order to play at the highest level they can.

FC Tulsa - playing in roughly the second-ish tier of America soccer - has players from The Gambia, Nigeria, and Cuba… and that’s just on defense! Take a look at the rosters for the Euro 2020 Championships taking place right now, and you’ll see how few of them are playing in their home countries. That is a measure of success, and with athletics being one of the few sports with a truly global grassroots base of athletes, similar movement of athletes should be possible.

A functional athletics ecosystem in the US would benefit greatly from international athletes. They could bring the culture of the clubs they grew up with to American clubs (preferably new startup clubs, since there’s little hope of changing the culture of the existing ones). There would be the social and commercial cachet that comes from an international presence. There would also be a stronger delineation between club / professional athletics, and the Olympic / national team focus that dominates so much of track & field to the sport’s detriment. The more we can separate athletics from the Olympics, the more we’ll be able to establish a continuous presence and - therefore - upward trend for the sport, instead of just waiting four years for the next blip.

Best of all, these athletes are already here! The numbers above are from the top 10 finishers at NCAA Division I, but it stands to reason that the percentages would extrapolate to the start lists; and, to varying extents, to team rosters and the other divisions of the NCAA and NAIA.

If any of this sounds interesting to you, if you’d like to both stay in the sport and stay in the US to do it and if a European-inspired club model - or just anything different - appeals to you more than what’s out there in American track & field right now, mash this link and let us know.

What were the viewership ratings on track & field's PPV meets?