Track & field Olympic Trials are underway for about 1,000 athletes. About one-third of them found out earlier this week that they were off the bubble and on their way to Eugene.

It’s a track & field tradition. Days - literally, days - before a national championship meet, the entry window closes and USA Track & Field fills out the fields by accepting athletes who did not achieve the qualifying mark, giving them days - literally, days - to book flights to places like Eugene, Albuquerque or Sacramento. The stress of wondering whether they’d get in off the bubble is replaced first by elation, then by exasperation as they see how much flights cost on three days’ notice to small airports, and how few rooms are available in a city of 175,000 hosting a major sporting event.

But even so, for those track & field athletes who end up on the happy side of the bubble, it’s worth it. And, in the grand scheme of things, their travel logistics are a relatively small amount of the money and stress that goes into their pursuit of the sport.

1,303 athletes submitted a mark in the hope of making it to the 2020* US Track & Field Olympic Trials. Of those, 656 had the qualification mark for at least one event; 334 were accepted; and 395 remained on the outside looking in.

Every event family except for the multi-events saw a plurality of entrants with a qualifying mark. Distance runners, on the other hand, had 75% of entrants punch their tickets to Olympic Trials before the qualifying window closed. As a result, only three runners - all in the men’s 10,000m - were welcomed in. However, multis had only 62 entrants, less than half of the next lowest event, hurdles. The other five event families ranged from 239 (middle distance) to 287 (sprints) entrants. 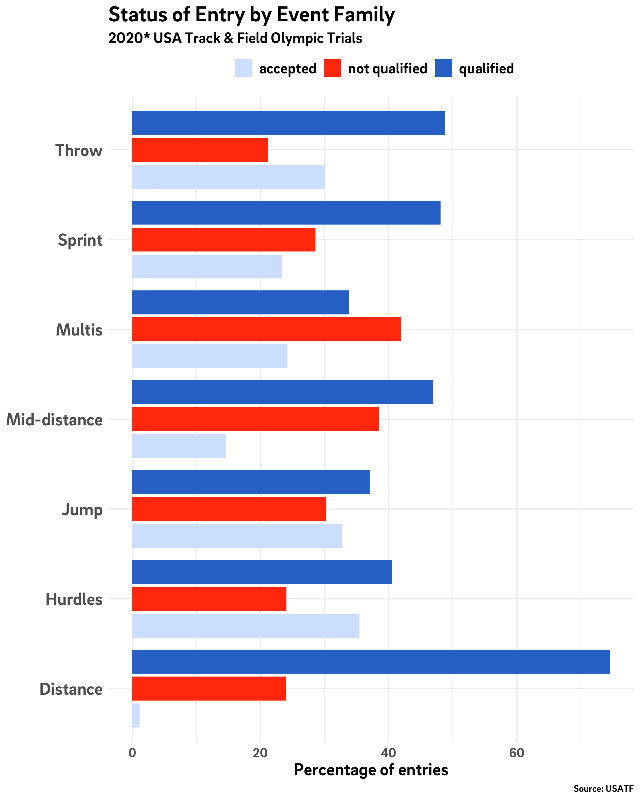 It appears that, like at most USA Track & Field National Championships, there will be more collegiate athletes at Olympic Trials than sponsored athletes or club / unattached athletes. We say “it appears” because several hundred athletes did not list an affiliation when they submitted their entry. As a result, the “Affiliation” column on USATF’s “Status of Entry” page contains far more blanks than the start lists and results pages will. 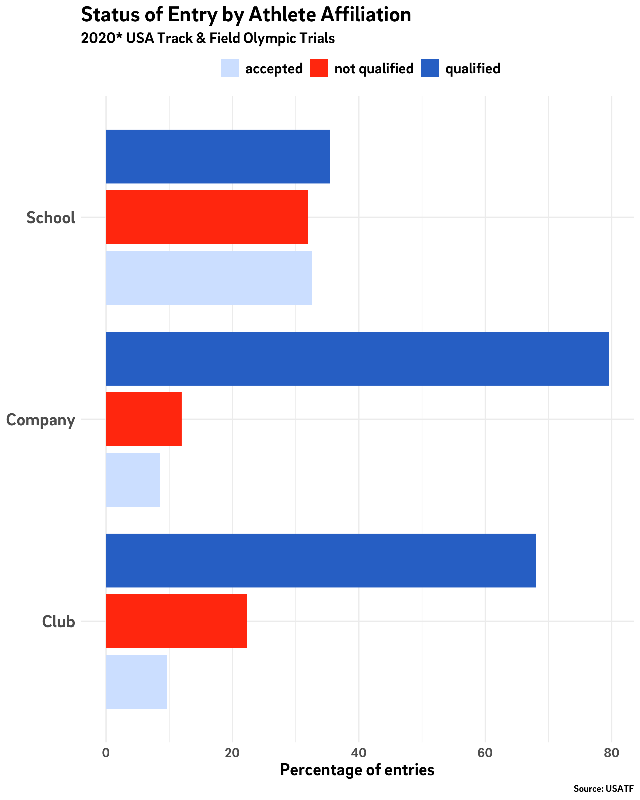 The main difference comes in the not qualified, not accepted category. Two hundred college students submitted a mark but will watch from home, as opposed to 91 post-collegiate (sponsored or otherwise) athletes. This makes sense, as qualifying for Olympic Trials is just about the minimum expectation for a sponsored athlete. Other post-collegiate athletes may be more sanguine about their chances of making it in or may not think they’ll be able to swing the last-minute logistics, even in pursuit of this goal, so they don’t register without a qual mark. College athletes have the least to lose, the most to gain and the largest dose of optimism and long-shot hope.

And, of course, there’s the inescapable fact that collegiate track & field programs are more than just the development pipeline to the pro ranks. They are a direct source of Olympic athletes, in addition to providing the coaches and facilities for many company-sponsored athletes.

The athletes who approach the qualification deadline on the bubble are the most under-appreciated and under-capitalized swath of athletes in American athletics. That level of the pyramid hits the sweet spot for quality * volume, as evidenced by the minuscule, heart-breaking differences between those make it in and those who remain out. That’s why they call it a bubble. Track & field loves its underdog stories (what is it with stars letting the fans and the sport down?), and the athletes on either side of the bubble are a great place to find the next one.

Are you reading this from home when you were thinking you might just be in Eugene? We meant what we said in the paragraph above. Drop us a line and let's build out the pyramid from the bubble on down.