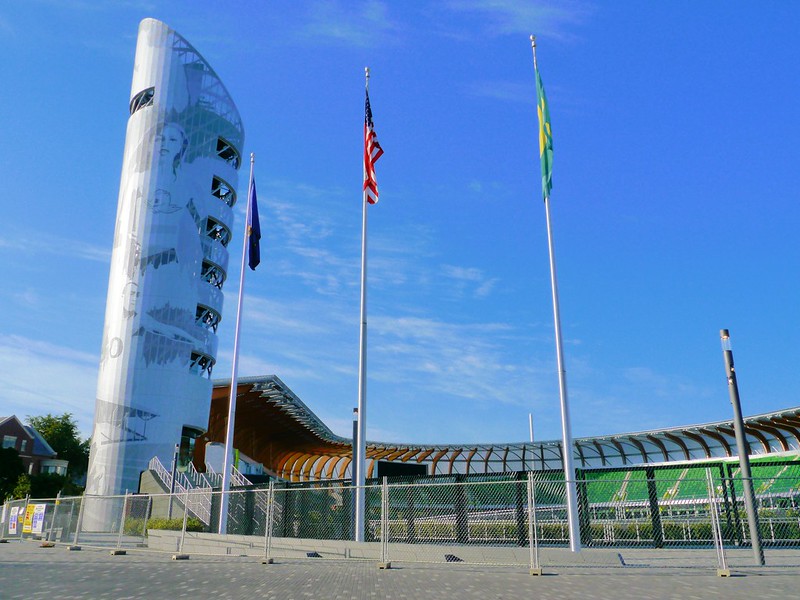 Twelve athletes set meet records at the US Track & Field Olympic Trials. We know these happened at the new Hayward Field, but where exactly did they happen within track & field’s most expensive stadium?

“At Hayward Field” is not enough of an answer. Sure, this quarter of a billion dollar stadium makes it easy to find the throws circles and jump pits by putting all of the field events within the oval. With that kind of money, it’s the least the Knights could do. Even so, the hammer throw was still bumped outside the stadium, most likely due to schedule and logistical concerns.

Which is all the more reason to have a 3-word address for every throws circle, jump pit, and start line in the United States - even the expensive, mostly fan-friendly, not very show-up-walk-on-and-train ones.

Tucked in between a rec soccer field, the square rec track around another soccer field and some tennis courts and some of Hayward Field’s outbuildings is the hammer circle where DeAnna Price and Rudy Winkler set their records.

Price set the record for the qualifying round (77.10), then returned for the American record (80.31m) in the finals. Winkler also took the national record in the finals of the men’s hammer, with 82.71m

MORE: T&F STADIUMS DETACH THROWERS FROM THE REST OF THE SPORT

There should be more shock and glitz in the javelin but, like the hammer, it’s lucky to be included in most meets at this point. Maggie Malone, who was one of the “unattached” athletes coming into this meet, threw 63.50m for a two-meter win and the meet record.

Avoid the rush and rename the west shot put circle at Hayward Field ///Ryan.Crousers.Circle. It’s only fair, since the only person who will break the record he set there will be him, at least for the foreseeable future. His 23.37m throw appeared to land in ///guitar.navy.dame.

They might need to expand the landing area out a few meters if they plan on having him back.

OK, so which event is less appreciated: the hammer, which had to use a circle outside of the stadium? Or the triple jump, which uses the same track-side runways as the long jump, but doesn’t even get a clip of Keturjah Orji’s meet record on NBC Sports? We had to go with some fan’s video on YouTube (props, Dr. Seth Jenny).

Orji jumped 14.52m to set what might be the least-viewed meet record of the Olympic Trials. If only an NFL player competed in the triple jump.

OK, hmmm, this is a bit odd. NBC Sports does not have any footage on YouTube of the pole vault finals. We would have thought pole vault would have warranted some highlight clips, especially since so many of the throws and one long jump competitor have clips. Dr. Jenny to the rescue yet again!

Well, as best as we can tell given the camera angle, Katie Nageotte set her PR and meet record of 4.95m at //take.hammer.deed.

RELATED: T&F CAN LEARN FROM TENNIS: NO MEDIA, NO MONEY

Running events: We’ll get back to you!

Yes, we are biased in favor of the field events. No, that’s not why we’re not providing the 3-word addresses of the start or finish lines for the Olympic Trials records set at Hayward Field. It’s just the none of the publicly accessible satellite imagery has been updated since they painted the lane lines on the track. So while we were able to grab the 3-word address for the throws circles and jump pits, we can’t yet do it for track events.

When we can, we’ll update this article!

What you can do now, though, is use our Map app or download what3words’ app to find the 3-word address of your PRs, wins, favorite places to train or some other great place in your athletics career. When you do, um, tag us or something on Instagram, but better yet, drop us a line and let us know what you want for your future in the sport.

Sha’Carri owned Oly Trials on the track and YouTube; demand for more throwers?