How much do college track & field coaches make? (Data viz) 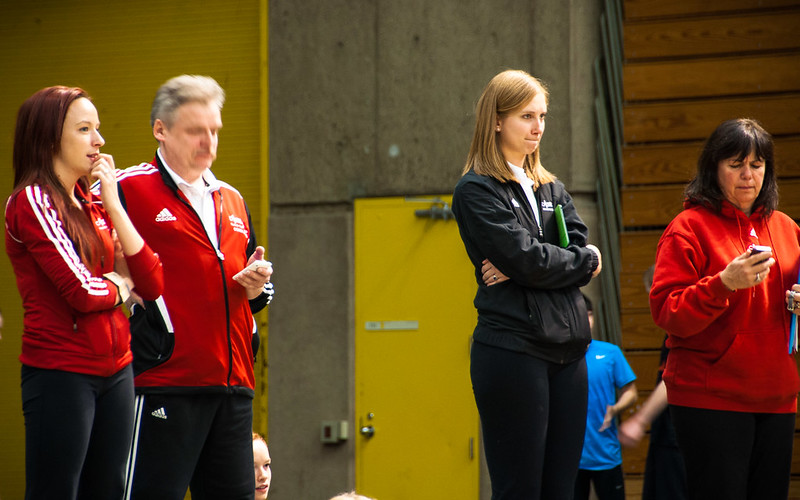 How much pro track & field athletes make is one of the great questions of sport. Every few years an anonymous survey or a heavily-redacted, surreptitiously-transferred document will set off a round of speculation and invective, but no one can point to a credibly and transparently sourced data set to offer a range of what athletes in each event at given levels of success make. It seems the athletes’ non-disclosure clauses bind them for life, and that ex-agents and former shoe company sponsorship managers are similarly bound into perpetuity. Or, alternatively, maybe no one has ever thought to ask them (in our experience, that’s likely the case).

There is one locus of transparency in track & field finances, though. The collegiate system holds a near-monopoly on athlete development and, in some years, sends more athletes to USA national championships than the shoe companies and post-collegiate groups. Since much of the collegiate system - including many of the top track & field programs - is publicly funded, many coaches’ salaries are a matter of public record, making them easily searchable under states’ sunlight laws.

We pulled the salary data for 611 collegiate track & field coaches from 125 schools across 19 states. We noted each coach’s title and the event groups they coach, in an attempt to see how salary tracks with both position and event group.

This is not a scientific, rigorous or comprehensive review, so before we jump in, a few notes on methodology and motives.

First, the process: we’d think of a state, see if they had a searchable database of university employee salaries and, if so, would pull up a list of public universities and colleges in the state. It’s possible we overlooked some schools in some states. We’d then go to the track & field page on each school’s athletics department site, look up the coaches for the most recent year covered by the salary database (2018 or later) and record their title and the events they coach.

Second, we only included amounts that we could confirm came from their track & field coaching. If their coaching stipend was bundled into a larger compensation package for another job at the school, we marked it “NA.” More on that below.

Finally, how did we end up doing this? Over the summer, we hosted a group of sports management students from the University of North Texas for a summer “living lab” research project, in place of the internships not available due to the coronavirus-induced shutdown. They conducted market mapping research, and one of the questions was how much can coaches expect to get paid. Asked another way, how much would a team have to pay a coach?

After getting a rough estimate from a few schools in their target states, we realized this could be a larger, longer-term project as part of our broader goal of putting the business of track & field in the open and in context. So here we go.

Unsurprisingly, NCAA Division I - mainly, but not exclusively, FBS - pays significantly more than the other divisions and institutions. Fifty-two D-I coaches - including 18 associate or assistant coaches - make more than the highest paid Division II head coach in our database. 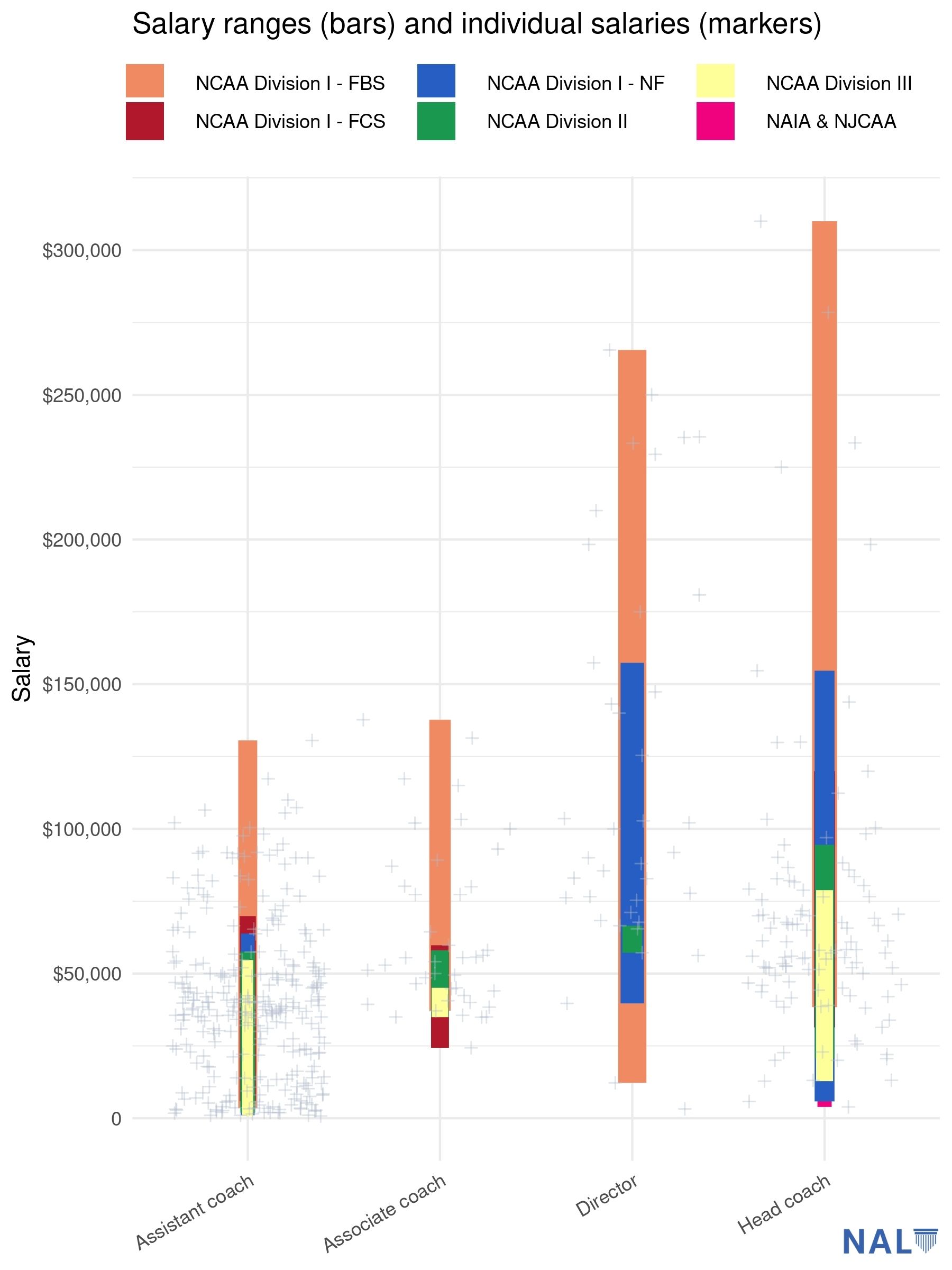 At every position and event group, Division I coaches make more than those down the pyramid. However, the salaries are top heavy in the same way the whole Division I system is: the average low ends of the scale are comparable across all divisions, and the average high ends start to open up as you ascend the levels. Then you reach the top jobs at Division I - FBS schools, and break the scale.

On average, a Division I - FBS head coach or director of track & field makes almost 2.5 times what a Division II head coach makes; and 1.7 times as much as a non-FBS Division I head coach. Those non-FBS D-I head coaches, on the other hand, only receive a 1.4x premium over D-II coaches.

Much like it is for post-collegiate / professional athletes, track & field is a part-time job for many college coaches. Nearly one-fifth of the coaches in the database make less than $30,000 per year. That includes 21 Division I - FBS assistant coaches and 13 head coaches, representing all three divisions of the NCAA plus the NAIA and NJCAA. The spread of event groups in the under-$30,000 coaches reflects the overall distribution of event groups across assistant and associate coaches we found.

Assistant and associate coaches: How much across the event groups?

There may be more jobs as throws coaches and distance / cross country country, but no more money on offer. Nor does there appear to be any financial benefit in coaching multiple event groups - the graph labeled “other event group combinations.” However, this is probably more a function of the level than coaches’ qualifications: Division I schools can hire more coaches for more specific positions and pay them better, whereas D-II and D-III schools don’t have the budget for a large coaching staff so each coach ends up coaching more events.

But at least those coaches get paid something. Over 30 of the schools use volunteer assistant coaches, with half of the volunteer coaches listed at NCAA Division I - FBS schools. 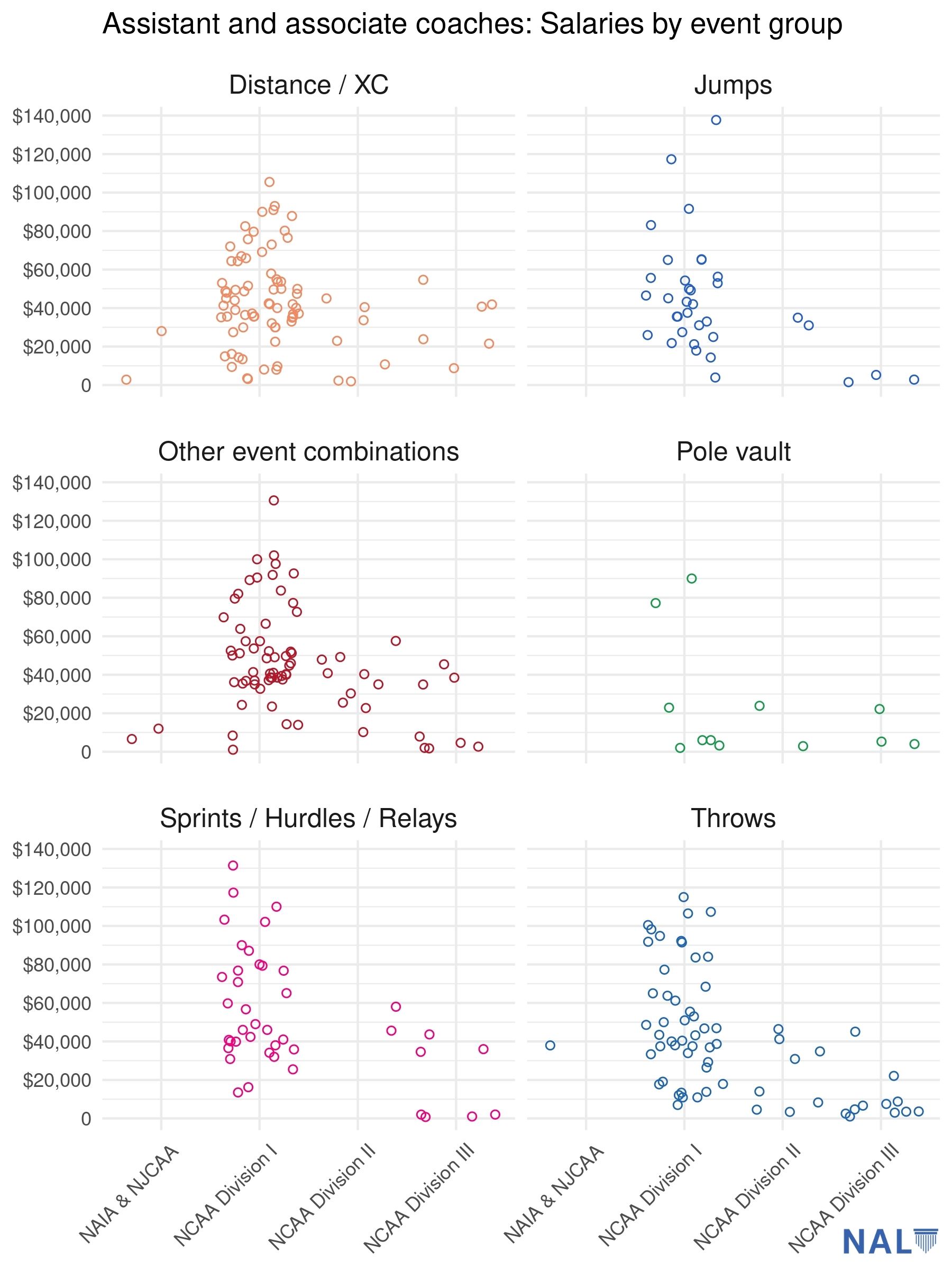 Observationally, the volunteer assistant coaches fell into two categories: old timers and post-collegiate / elite / professional athletes. The former have usually been around the sport for the better part of forever, are pillars in the local track & field community and usually coach or teach at local high schools. They’re the free labor of love, and tend to be at the lower Division I schools and then on down the pyramid.

The second group of volunteer assistant coaches point to one more way the collegiate track & field system subsidizes post-collegiate / professional track & field in the US. Whatever their nominal coaching duties are (and recruiting is a coaching duty), they are mostly there to be athletes. Being attached to the staff gives them access to the training facilities, coaches, athletic trainers, recovery facilities and the other luxuries of Division I FBS - all without any expense from the athlete, sponsor or any other entity associated with the athletes in their capacity as professionals.

Accounting dims some of the sunlight

State transparency laws only require the release of salary information for employees paid out of public funds. If the athletics department (or a single sport program) of a public university keeps its finances independent of the university - via media rights, sponsorships, donations, etc - it does not need to report those salaries. That was the case for at least three major Division I - FBS universities we cam across.

Particularly at smaller universities, the track & field coaches - even the head coach - had non-coaching full-time jobs at the school. Some states would break down the accounting (e.g., “$X as a lecturer, $Y as an assistant coach, $Z as a rec assistant) but others did not. This leaves open the possibility that, at those schools, the coaches are volunteers or are making so little that it’s barely noticeable in their overall salary.

Some states provided detailed accounting information beyond just name, position and salary. This gave a bit of insight into how the finances are set up. Not every coach’s coaching salary came from within the athletics department. In at least one state, some coaches’ salaries came through academic departments or the fitness / rec sports department.

The upshot of this is to keep an appropriately skeptical eye the next time you read about an athletics department’s finances, whether in the context of cuts, costs or savings. Transparency does not always mean clarity.

Takeaway #1: College track & field is often a side hustle (or less)

For 32 coaches at 17 schools in five states from Division I - FBS down to NAIA, track & field coaching hits one aspect of what business consultant Carol Roth has deemed a “jobbie”: they make less than 5-figures a year. And that’s not even talking about the explicit volunteers.

If programs continue to get cut, some full-out jobs will be lost and careers curtailed or interrupted, but for the most part it’ll be a part-time job here, a side hustle there, a jobbie over that way. With more people looking for fewer jobs after each cut, some of those coaches will go into other lines of work and some may just continue on with their main job, since track & field coaching was not paying all the bills even when it was paying some. Some will land at another college job(bie) and continue up the ladder. But there may be a few who cannot find a track & field job, but still want one.

Which brings us to the other part of Roth’s jobbie test: whether they have a great chance of their income from that endeavor changing some time in the future.

College track & field coaches, like post-collegiate / professional track & field athletes, have little, if anything, to lose. The question is whether the coaches will distinguish themselves from the athletes by acting like it. If a college track & field coach receives any offer to coach outside of or parallel to the collegiate system, they have little professional justification to say no, neither by income nor profession security. If they ever had a stable job that they did not want to risk losing, they may still have the job but it is no longer stable. And if what they are really interested is a stable income from track & field, supplementing the unstable and vanishing jobs with, well, anything can only further their pursuit.

Takeaway #2: T&F coaching is a buyer’s market, if anyone’s buying

On the other side of things, track & field coaches can be had on the cheap! If anyone were to be buying, it would be a buyers’ market. A full staff of Division I-calibre jump, throw and run coaches would require a relatively small level of investment or revenue. Athlete club fees alone could cover it.

Any coach demanding a full-time salary or one approaching other sports’ coaching salaries should be directed to their current pay statement, the data viz above or an article like this one looking at the broad expanse of professional sports outside the “big four” and below the major leagues in those four sports. The same goes for the athletes, even in the absence of solid data.

Aside from making track & field an outlier in the sports industry and depriving fans of something interesting to talk about, the lack of information around wages makes it impossible to gauge what anyone is worth.

WANT MORE NUMBERS OR A NEW PLACE TO TRAIN? Expand the map, expand athletics: 31,000+ places to throw, jump or run

Way back in the day, I wrote an article about how much it costs to be a “professional” track & field athlete. That sort of thing is useful for an aspiring post-collegiate athlete or a patron looking for a new beneficiary under section 501(c)3 of the IRS tax code, but is useless for anyone on the commercial demand side, the investment side, the what’s-in-it-for-me-beyond-a-write-off-and-a-warm-fuzzy-feeling side. People in those positions don’t set wages, salaries or investments based on what the recipient needs. They - angels and ministers of grace, defend us! - set the terms based on what they expect to get out of it. Because we don’t know what professional athletes and coaches make, we don’t know what they are worth to their sponsors. Again, maybe that’s the point.

Hopefully this effort will go some way towards helping somebody decide what to offer a coach outside of the college system, and perhaps encourage someone to add some information to the market.