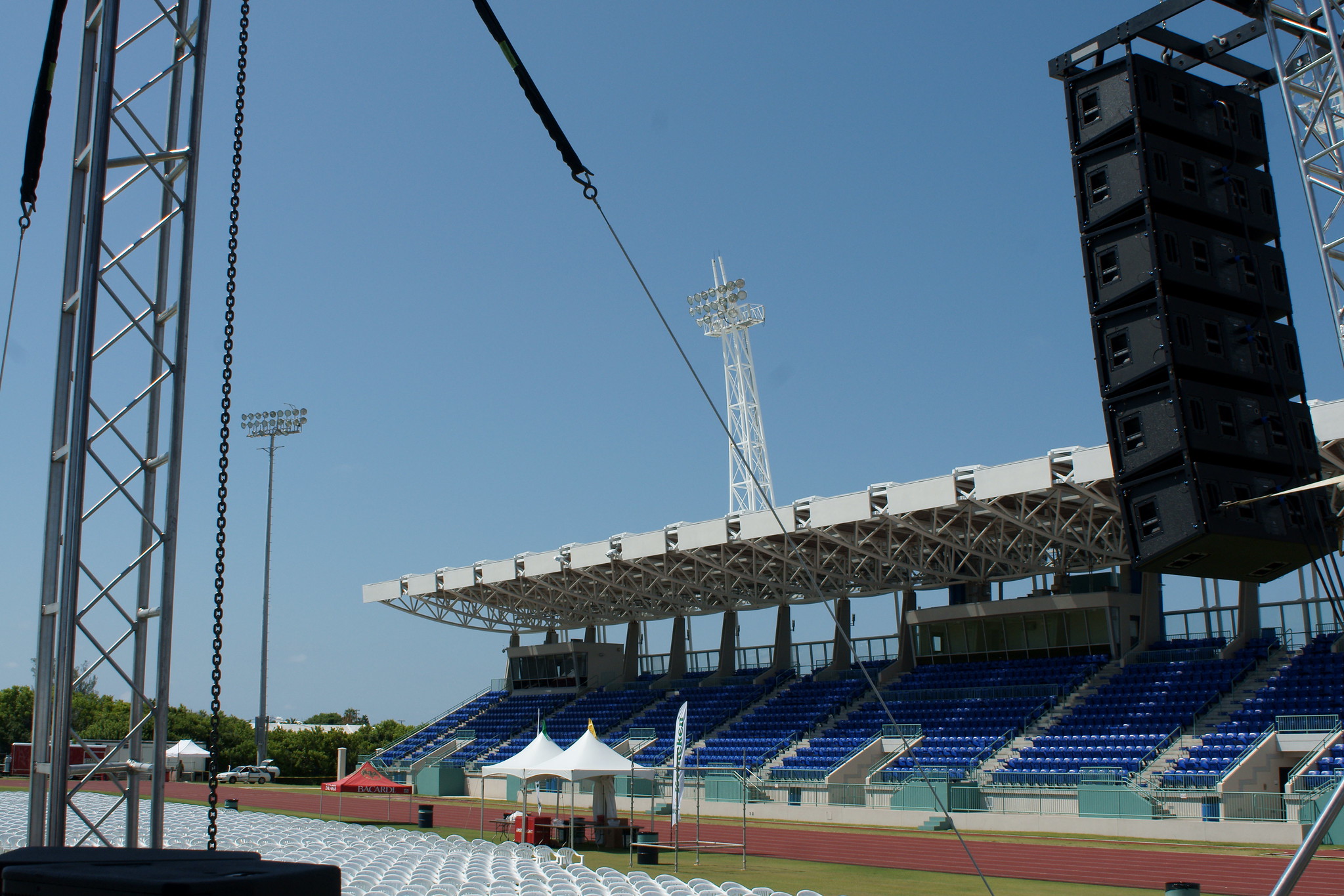 Successful sports and teams sometimes worry that their fans are fair weather. Track & field won't have to worry about that problem as long as the athletes are literally fair weather.

Growing up in Buffalo, I watched plenty of Buffalo Bills games taking place during snow storms, occasionally during a blizzard. These days, watching 2-3 Chelsea FC matches each week, I’m used to seeing the players look like wet dogs as they play through 90 minutes of downpouring rain, with water spraying up as the ball rolls along the pitch and players frequently slipping and falling on the slick grass. And as a lifelong Boston Red Sox fan, I feel pretty comfortable talking about semi-enclosed wind currents, their effects on fly balls and the resultant impact on players’ stats sheets. Maybe that’s the ultimate cause of the whole sport science thing.

NFL games in a blizzard are memorable and have great visuals, but the quality of the football is pretty low. There’s no passing game to speak of (unless you’re Tom Brady) and running backs can only make a light cut before they slip.

The other football (soccer) isn’t any better in the rain. Eden Hazard and Kai Havertz lose a lot of their unique value when they can’t stay on their feet. Passing playmakers need the ball to do what they need it do - and what it usually does - when they try to thread it through the lines. The ball doesn’t play along when it skips and slides along a waterlogged pitch. The cold rainy night in Stoke really is a leveller.

And if baseball thinks it has an excitement problem now, just imagine if fans thought they were watching a ball head over the wall, only to see it hit an invisible wall of wind and fall into an outfielder’s glove.

Despite the obvious drop in every form of quality, these sports play on in snow, rain and wind. The players don’t ask the coach to sit on the bench or tell their agent to put a bad weather clause in their contract, excusing them from any game in suboptimal meteorological conditions. Imagine the fan response if they did. The fans at the stadium are enduring the same conditions as the players. They didn’t pay to watch whichever players were comfortable playing that day. They came to watch their team and their favorite players, with the lineup chosen by the coach to maximize the chance of a win. Not to maximize any one player’s comfort or performance potential. They came to see their team compete and win, which would probably be an ugly, sloppy, highlight-depleted win, but a win just the same.

Or maybe they just came for an entertaining night out of the house.

But that’s just one of the many reasons why those athletes, teams and sports are successful, while track & field is not.

Track & field athletes: Not for the W, not for the fans… so, for what?

At least week’s Bermuda Games, Grant Holloway withdrew from the 110m hurdles, saying “[The wind’s] as high as -4.6mps - I don’t think that is great for the hurdle event. I’m trying to do consistency, that is the main cue for this season, so I decided to pull out of this race.”

Many players in each of those sports surely would love to focus on their consistency each season. Others may want to focus on goal scoring, passing stats, skill development, slugging or on-base percentage. Some players’ priority is to just to get through the season without an injury.

Weather conditions are not always amenable to those goals. Oh well.

One goal of sporting competitions that is weather agnostic is the only goal of all sporting competitions: winning. Two teams play in a blizzard, squall or windfest - one wins. Might not be the highest quality game any has ever played or seen, but a W’s a W. It’s why they play. That and the fans, both in terms of their sense of obligation or loyalty to the fans and their awareness that the fans are the ultimate source of their income.

WHAT ELSE CAN WE LEARN FROM SOCCER? LESSONS FROM VILLAREAL’S EUROPA LEAGUE TITLE

Well, winning is the goal of almost all sporting competitions. It’s not the goal in most track & field competitions. If it was, Holloway would have raced into the 4.6 m/s headwind. Every other runner would be doing the same, so the best runner on that day in those conditions would win - just as the best runner on that any day in any conditions will win. Holloway was at no disadvantage relative to the other runners. He still could have beat many or all of them. But he didn’t care about the win because track & field doesn’t care about winning. He cared about his mark because track & field only cares about marks.

“Flip the track. Please & thank you. It’s possible. The wind is -4.6 right now. Please. Think about the athletes & not the viewers.”

Definitely don’t think about how it would go down in any other sport if fans showed up or tuned in and found out they’d have to watch a half-strength lineup because the players on the biggest salaries who are the faces of the team self-scratched (and the coach went along with it!) because not everything was perfect. And because, sure the team might lose without them, but at least they wouldn’t have an subpar performance.

You can’t think about that last one because it’s inconceivable in any sport other than track & field.

DISC GOLF HAS FIGURED SOME OF THIS OUT: WHAT T&F CAN LEARN FROM DISC GOLF

Before you think we’re calling out Grant Holloway, we’re not. He is anything but a fair weather trailblazer. Distance running has been doing this for years, none more so than Alberto Salazar and Jerry Schumacher. They’ll move the time and location of an event hours before it’s scheduled in an attempt to ensure perfect conditions - even if fans have already cleared their calendars, purchased tickets or bought the livestream.

That is the logical endpoint of thinking of the athletes and not the viewers. It’s merely surprising and disheartening to see it in a non-distance event, particularly an event and athlete with huge marketing and fan engagement potential.

And before you point out that many sports do postpone or cancel games due to weather, think about why they do it: safety (lightning, tornado, etc) or the effect of the weather on the infrastructure and equipment, not the effect on player performance. Baseball grounds crews run out the tarp to protect the field. Tennis does the same to protect the court and the balls.

NALathletics has unlimited openings, but none for fair weather athletes

A player or coach who tried to pull something like this wouldn’t last very long with NALathletics. Well, they’d probably never join any way because our priorities and structure are so obviously counter to their own. But if they did, their teammates would make sure their attempted wind waiver was the among the very last things they did as part of the team.

For starters, NALathletics’ matches are about winning. Set all the PRs and SBs and whatever else you want. Great. We love seeing hat tricks and home runs and 40-yard touchdown passes and comebacks from triple set point, but we ultimately want our teams and favorite players to win. None of those individual accomplishments guarantee a W. Same here. A player can PR all six throws and still be on the losing team, while the winning team has a player who barely got all six out of the circle.

Next, we’re here for the fans. When they show up, they know what and who they are getting. These two teams, with these players competing in these events. If there’s a matchday scratch, it’s because of injury - not comfort, vanity or preference.

RODEO GETS IT, FFS WHAT TRACK & FIELD CAN LEARN FROM THE PROFESSIONAL BULL RIDERS

As with other sports, the schedule comes out weeks or months in advance and it’s a contract, a commitment, an obligation between the athletes, teams, league, fans and sponsors. Rams fans don’t show up to buy tickets at SoFi Stadium saying “I wonder who the opponent is today. I do hope Andrew Stafford plays!” That’s ridiculous, and it should be. What happens during the course of play should be surprising and unexpected - that’s part of the excitement. Players deciding if they’ll play is not part of the suspense - it’s box office poison.

FAQs: GET SOME ANSWERS, THEN ASK US ABOUT THE REST

Going along with the fan focus is the team focus. Players aren’t going to sandbag their teammates by saying “Not today, guys, it’s kinda humid.” They have a commitment to their teammates, their coach, the badge, the sponsors and the fans.

Then get in touch. Teams and leagues are coming together now, so drop us a line and tell a few friends.