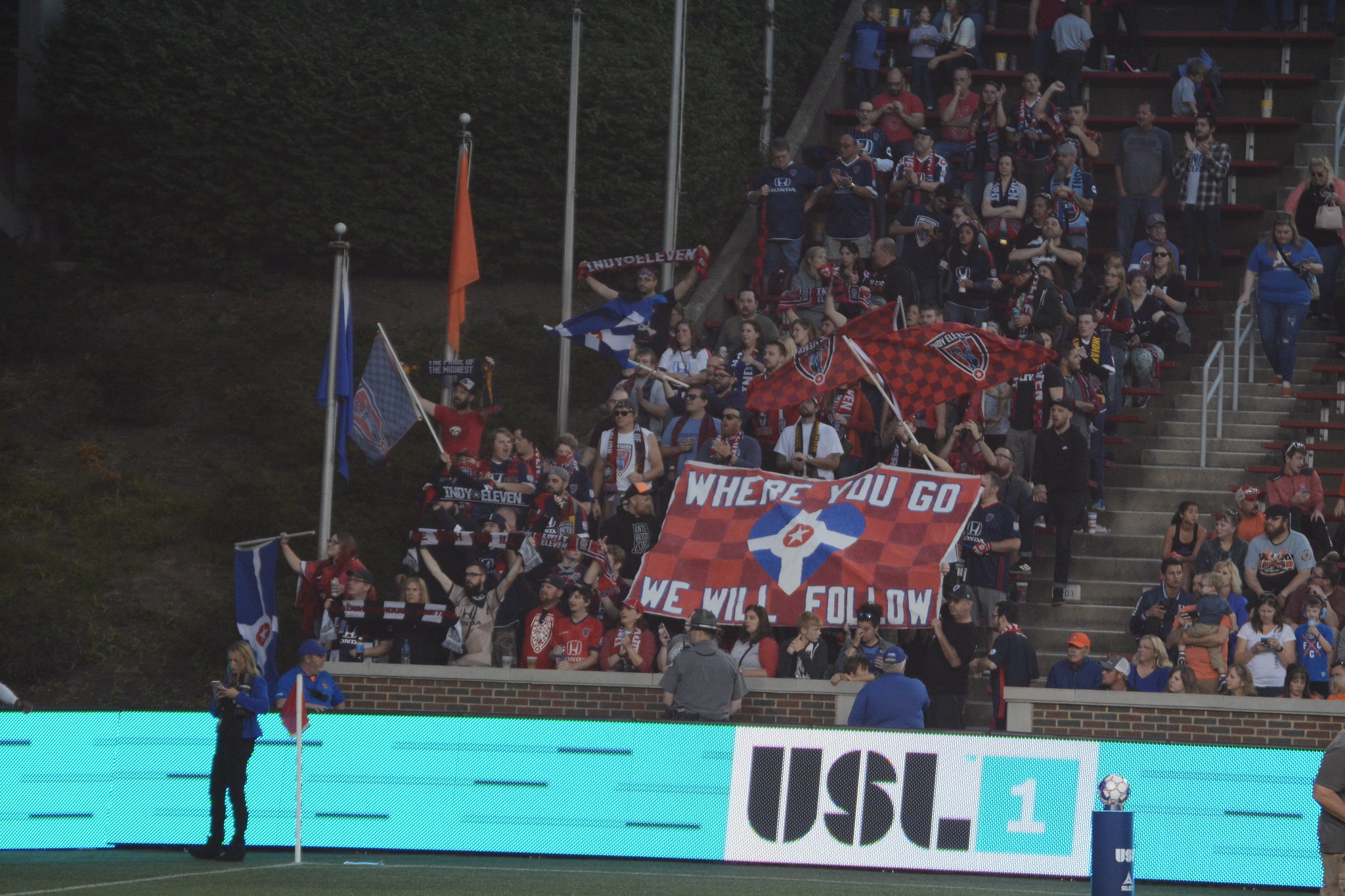 World Championships showed that track & field can do it once, under near perfect conditions, where "it" is attracting the same number of fans each night as a regular season second tier soccer game.

As 12,143 fans watched the culminating night of American track & field’s return to the international spotlight at Hayward Field, 9,020 fans attended a second-tier soccer game just a few blocks away from USA Track & Field’s headquarters in Indianapolis. One week earlier, about 10,000 fans attended the second evening of World Championships, while in Sacramento – a regular host of USATF national championships, most recently in 2017 - 9,161 fans attended a second-tier soccer game between Sacramento Republic and Birmingham Legion. And on the same night in the same second tier of American soccer, perennial USATF Indoor Championships host city Albuquerque saw 12,069 fans gather to watch New Mexico United take on the Pittsburgh Riverhounds.

These were all regular season games in the United Soccer League Championship: not playoffs, not cup ties, not exhibitions against a European team on their preseason tour. Just the normal weekly games, as reflected by how closely the attendance at each hewed to the teams’ average attendance this season.

New Mexico United, Sacramento Republic and Louisville FC have each had at least one game this season with over 11,000 fans in attendance; and New Mexico’s average attendance is 10,881, which coincidentally was the official attendance at Worlds on Wednesday, July 20.

Track & field’s annual-ish world championships draws the same number of attending fans from a local, regional, national and international audience as second tier soccer does every week from the local market in three mid-size American cities.

These United Soccer League matches certainly did not come close to the TV and streaming viewership of World Championships. As The Sports Examiner notes, NBC averaged 2 million viewers across 12 hours of coverage on the main network and 403,000 viewers across their cable properties, plus the streaming audience on Peacock. TSX’s data does not break down how long the average viewer watched in a given sitting, so these numbers may be skewed by segments of peak interest, such as the sprints and relays, particularly those featuring Allyson Felix.

World Championships’ viewing numbers, though, are in the ball park for total mid-season attendance for the season across USL and USL1, the third tier of American soccer. 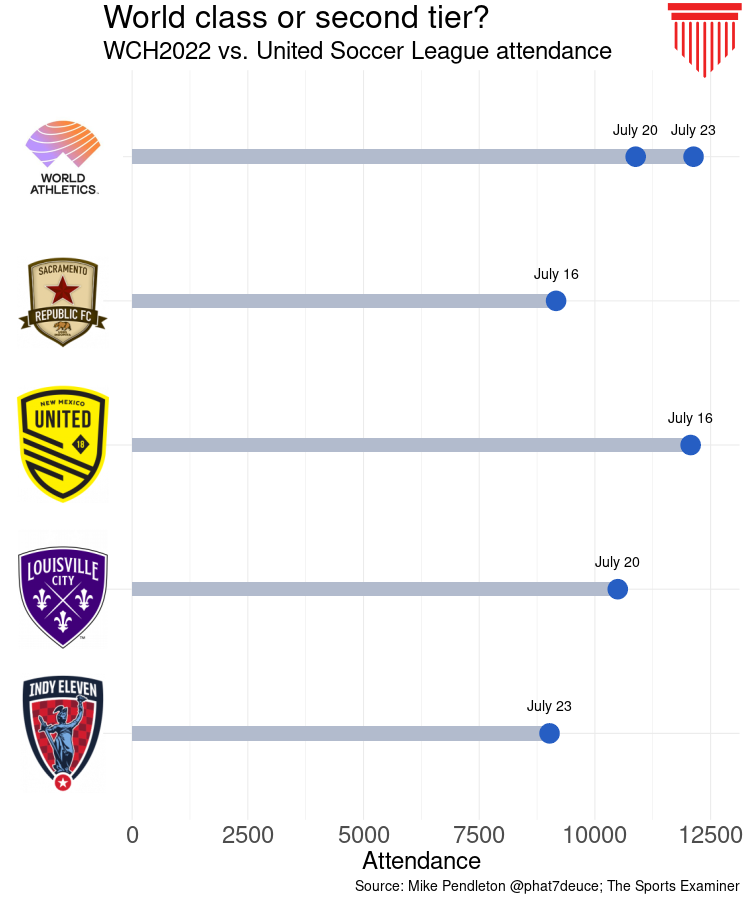 As of July 24, 11 games into a 32-matchweek season, 1.3 million fans had attended a USL Championship game and 185,000 fans attended USL1 matches. That puts them on track for about 4 million fans and a half million fans, respectively.

The various apples-and-oranges comparisons here are not only apt – they prove the point. Recurring customers (fans) are more valuable than one-time customers. In-person fans are more valuable than remote fans. Sports properties would rather have 4 million in-person fans, many of whom are season ticket holders or multiple game attendees, than 10 million remote fans over the course of a week. The property with the recurring in-person fans features teams in the second-tier of their sport in a country in which that sport is, at the global level, decidedly second tier. The other, the one that managed to do each night for one week what several cities do every week, featured the world’s absolute best athletes in their sport.

The two points of comparison that favor World Championships are location and price. Eugene is much smaller than most USL cities, even as the USL cities tend to be mid-market or lower. The three USL teams with average attendance over 10,000 are in their respective state capitals and, in the case of Indianapolis and Albuquerque, largest cities in their states. World Championships tickets were also more in line with an international destination event than weekly, local entertainment. The cost and logistics of travel, lodging and tickets made World Championships cost prohibitive for many fans.

But again, this cuts both ways and stronger in one direction. World Championships were an international destination once-in-a-may-not-come-back-here event, not affordably priced, regularly available local entertainment for families and hipsters.

Nothing about World Championships is the basis for a successful business model, particularly not in sports.

Fans of English soccer are quite familiar with the midweek, midseason weather in the mid-sized Midlands city of Stoke. A common bit of banter about tactically inventive coaches, highly skilled players and teams with intricate playing styles is “Sure, but can they do it on a cold rainy Wednesday night in Stoke?” The quip combines the “any given Sunday” competitiveness of the Premier League with the idea that eye-catching, league-dominating football depends too much on perfect conditions. When the players are cold, the ball skids across wet grass and the goalkeeper at one end can barely see his counterpart at the other through the rain and wind, the advantages of being Chelsea FC or Manchester City vanish. The odds are even, or maybe even tilting towards the adverse-adapted home side.

After World Championships, the Stoke City question for track & field in the US is whether they can do it on hot, humid, rainy, windy, new-show-just-dropped-on-Netflix, other-sports-are-in-town-or-on-TV, we-could-just-go-shopping weekends – every weekend – in 10 or 20 cities across the US?

Because that’s the measure of success. World Championships showed that track & field can do it once, under the perfect conditions: a one-time, self-contained, destination international event featuring the best athletes from around the world in a purpose-built stadium with the pinnacle of the sport on the line. And even with all that, its bottom line looked more like a regular summer weekend in ABQ or Indy than a college bowl game, night under the lights at the US Open or a Game 7 in three of the Big Four.

Ready to jump, throw and run on a cold Wednesday night?

Want to give athletics a permanent home in cities across the US? Want to be part of showing how athletics – not track & field, athletics, our way – can, in fact, do it under whatever weather conditions you have in your hometown? Drop us a line. Teams and leagues are forming now. Where? Wherever you are.

Photo credit: Hayden Schiff via Flickr, under CC BY 2.0.