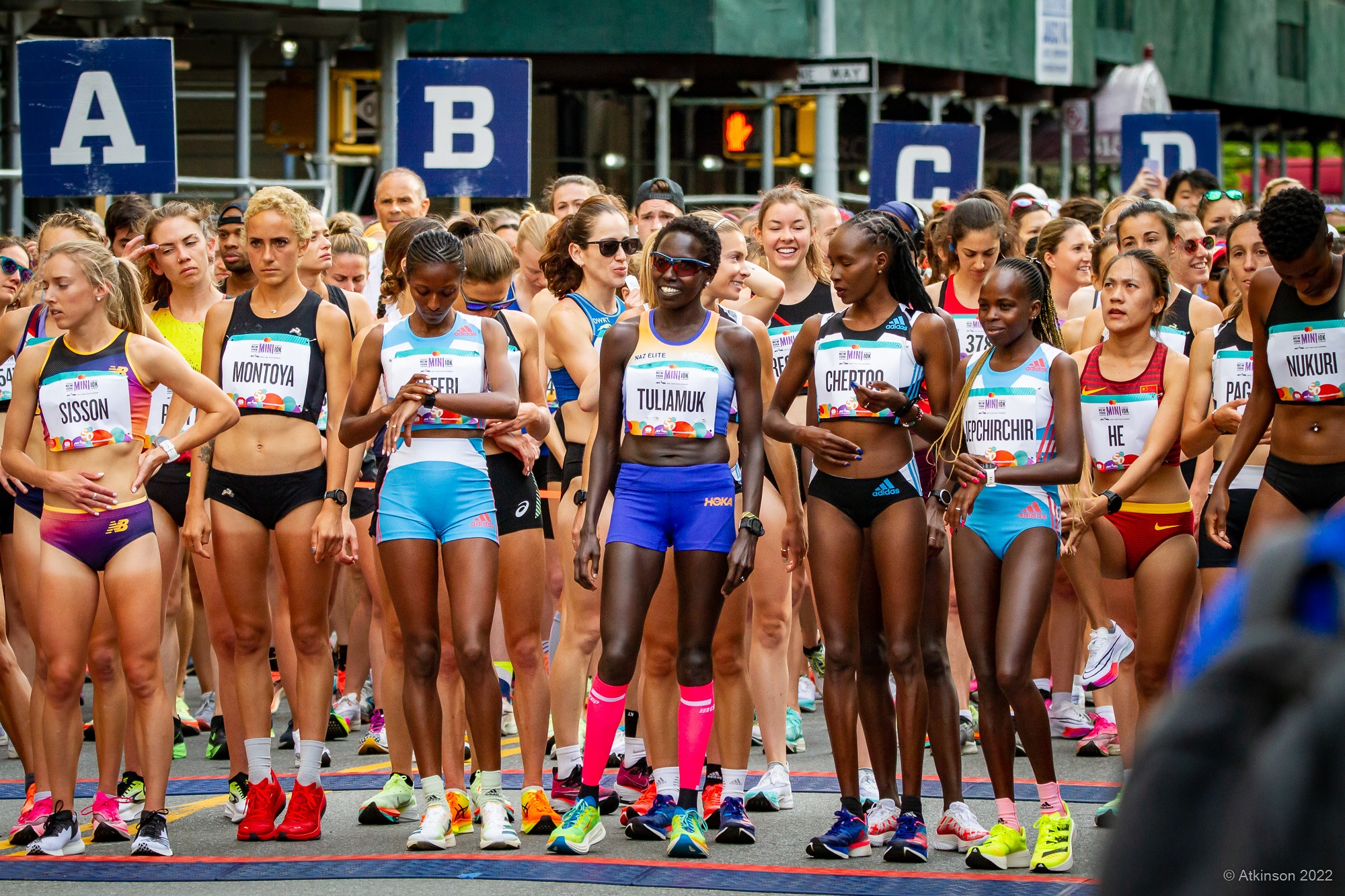 New York Road Runners once solved the gender pay gap, but in 2022 created a performance pay gap. They can talk all they want about inclusion and community, but this is sports. If they’re going to pay for performance, we have to talk about merit.

Most sports fans aren’t familiar with the significance of stats outside of their sports. Soccer fans clamor for their teams to sign a 20-goal scorer, while even the Montreal Canadiens had two 20-goal scorers en route to having the worst record in the NHL last year. Baseball fans see “100 mph” on the screen and know they just witnessed some heat, whereas men’s tennis fans see “100 mph” and think “second serve.”

Non-fans and casual watchers have to zoom out to gauge the stats they come across. 20 goals in the Premier League or NHL paint a different picture than 20 goals in NCAA Division II, regardless of sport. Someone who doesn’t know whether to be impressed by a ball travelling at 100 mph will get pretty close by noticing whether it occurred at Fenway Park or Wimbledon vice somewhere in Tulsa.

They can also look at the money.

A player who makes $800,000 a year is a better player or in a higher league than a player making $250,000 in the same sport. A tournament that pays out $2 million to the winner is several tiers above the one that pays out a total purse of $2 million (with the recent exception of LIV Golf).

If an observer sees, then, that two athletes earn the same amount at the same competition, they’ll likely assume that the two athletes performed equivalently. If it occurred at one of the oldest, most well-known and well-funded competitions in the sport, the non-fan will assume that the athletes are among the best of the best worldwide, doing things that few other athletes – let alone plebs – could do.

At nine New York Road Runners races – culminating in the TCS New York City Marathon - that observer would be wrong. 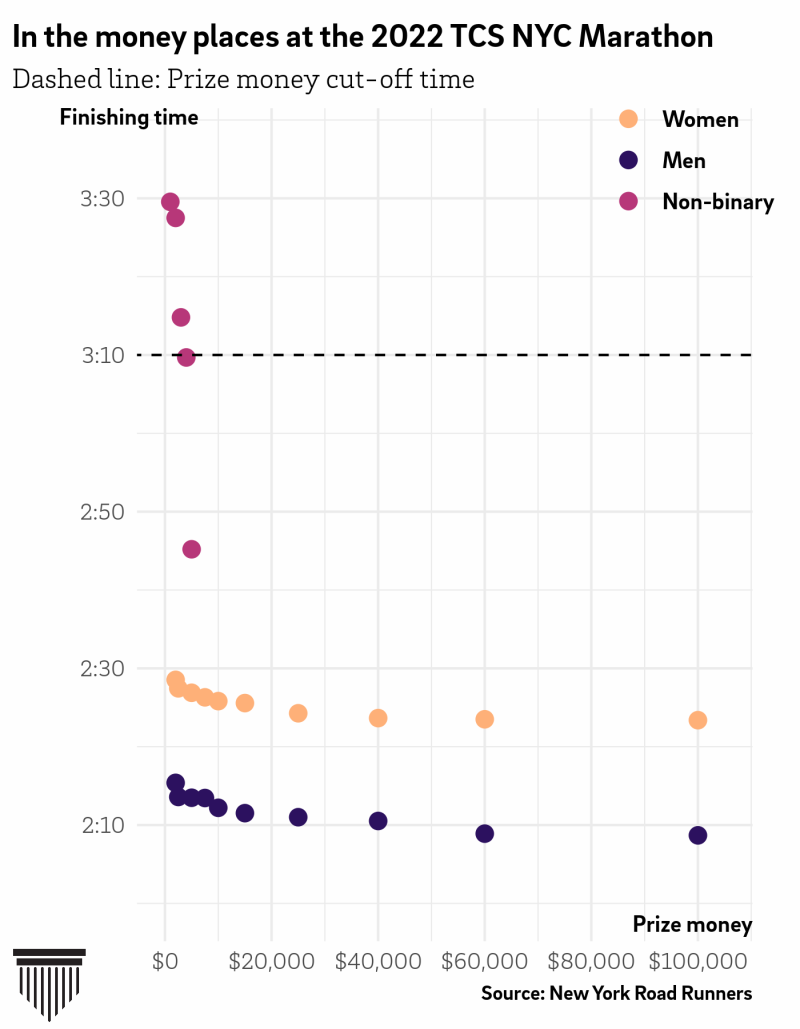 The New York Road Runners publicized equal prize money to male, female and non-binary NYRR members at nine of their 2022 races. Two other races, the United Airlines NYC Half and TCS New York City Marathon, offered money to the top men and women – regardless of membership, and without a non-binary category - in the Open Division. Those Open Division prize purses were ~10x (half marathon) and ~20x (marathon) those of the members-only allotments.

Whether the prize money across the three categories was equal or differed by an order of magnitude, the relative performance of men, women and non-binary runners was consistent across the races. 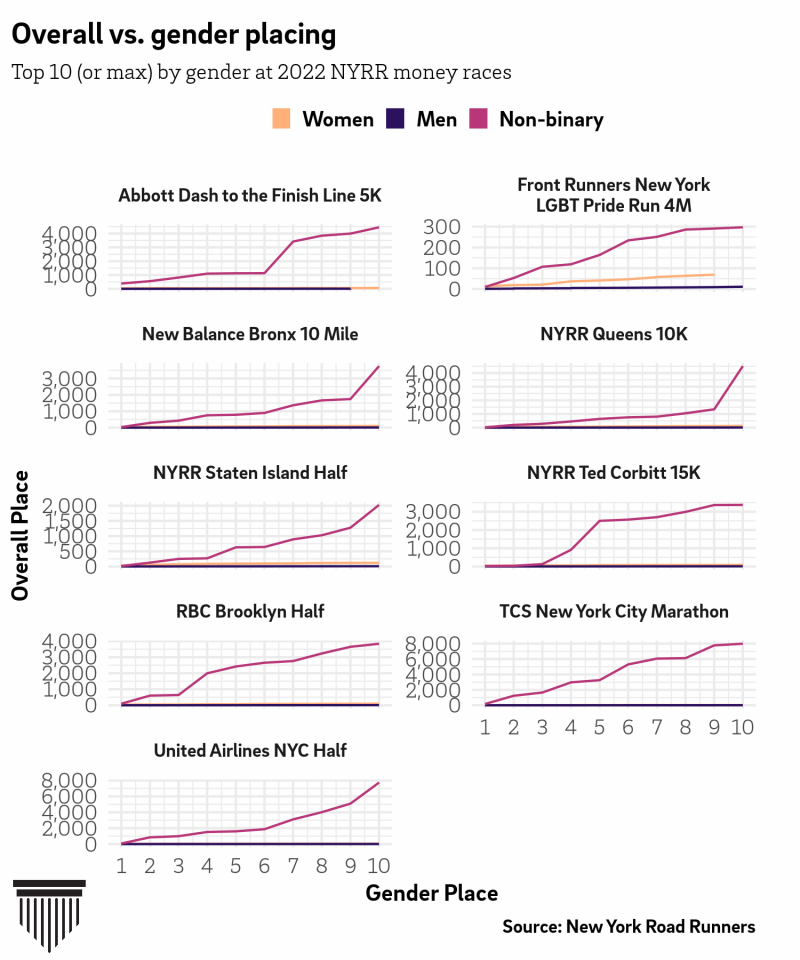 Compared to the narrow band between men and women top 10 finishers, the 10th place non-binary finisher could show up between 297th and 7,992nd place overall.

All for the same money.

New York Road Runners set a cutoff time for the prize money. The cutoff time was the same for all three divisions. Every 10th place woman had at least a 10% buffer from the cutoff time.

On the other hand, in only one of eight races did all non-binary runners in the “money places” (typically five deep) hit the necessary time. In fact, other than in that one, no more than four non-binary runners hit the cutoff time in any race. Consequently, might only be on the hook for about 70% of the $37,800 they allocated for non-binary prize money.

Just under half of that money could be earmarked for a single runner.

Only 10 non-binary runners finished in the money places and under the cutoff time in at least one race. Several did so multiple times, resulting in a leaderboard where one runner could claim $11,900 in winnings from eight races, followed by another whose placings equate to $6,500 from seven races.

Those are likely under counts of total potential winnings, as well. The prize money page on the New York Road Runners’ website did not include the New Balance 5th Avenue Mile as of November 14 or November 17, when we pulled the data for this article, nor on December 5 during final reviews. In fact, the only reason we have prize money information from the Ted Corbitt 15K is because we pulled the data in mid-November. Within a few hours of the race on December 3, the Ted Corbitt 15K disappeared from the prize money page.

Ultimately we can’t know for sure, because NYRR does not provide a searchable category for NYRR members in the race results, nor a members-only finishing or prize money table. We’re assuming that all prize money winners with the exception of the Open Division men’s and women’s money winners at the United Airlines NYC Half and TCS New York City Marathon are NYRR members. Happy to be corrected or provided with accurate information (we love info drops!).

The wide gap in “performance per dollar” between men and women, on the one hand, and non-binary runners on the other; the 30% of unpaid prize money; and the concentration of prize money to such a small number of runners shape the incentives around the non-binary category.

Like the old saying that you don’t need to out-swim the shark, you just need to out-swim the guy in the water next to you, winning $5,000 in New York Road Runners’ marquee race does not require you to run a time that only seven men or women bettered – you only need a time that 171 men and 25 women beat in this year’s edition. A time that would be on the podium at regional races nationwide, for free. 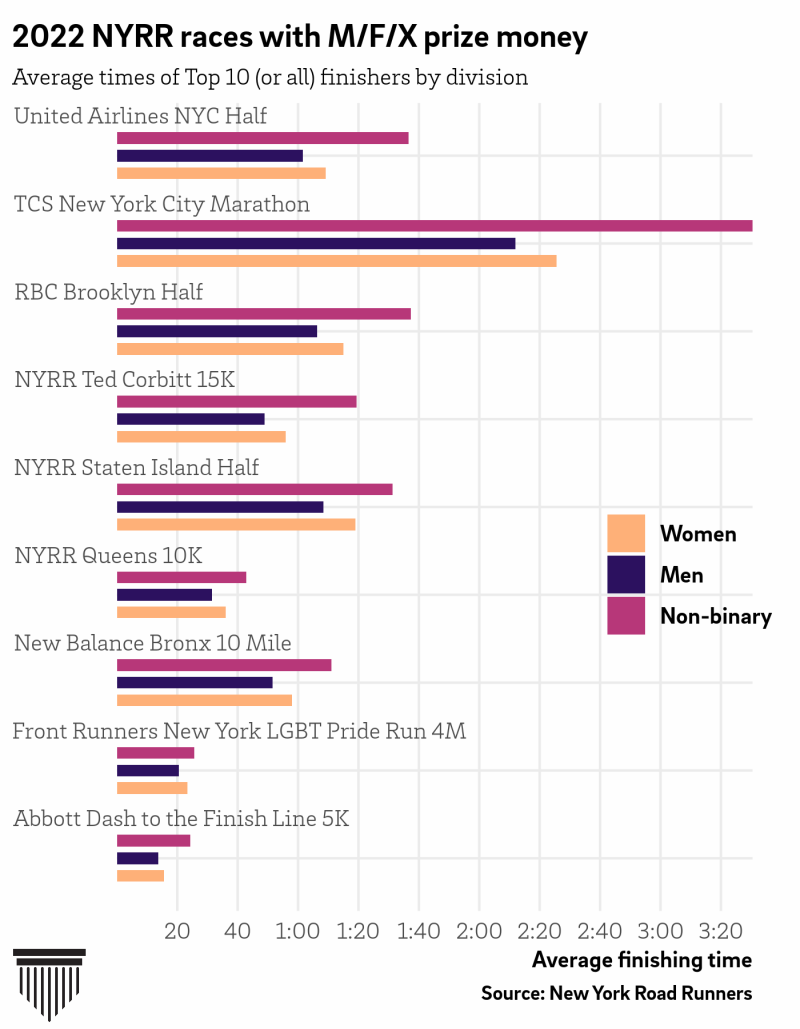 The graph below shows the range of men’s and women’s times that won prize money at NYRR races in 2022. The performance gap between men and women is consistent across distances. 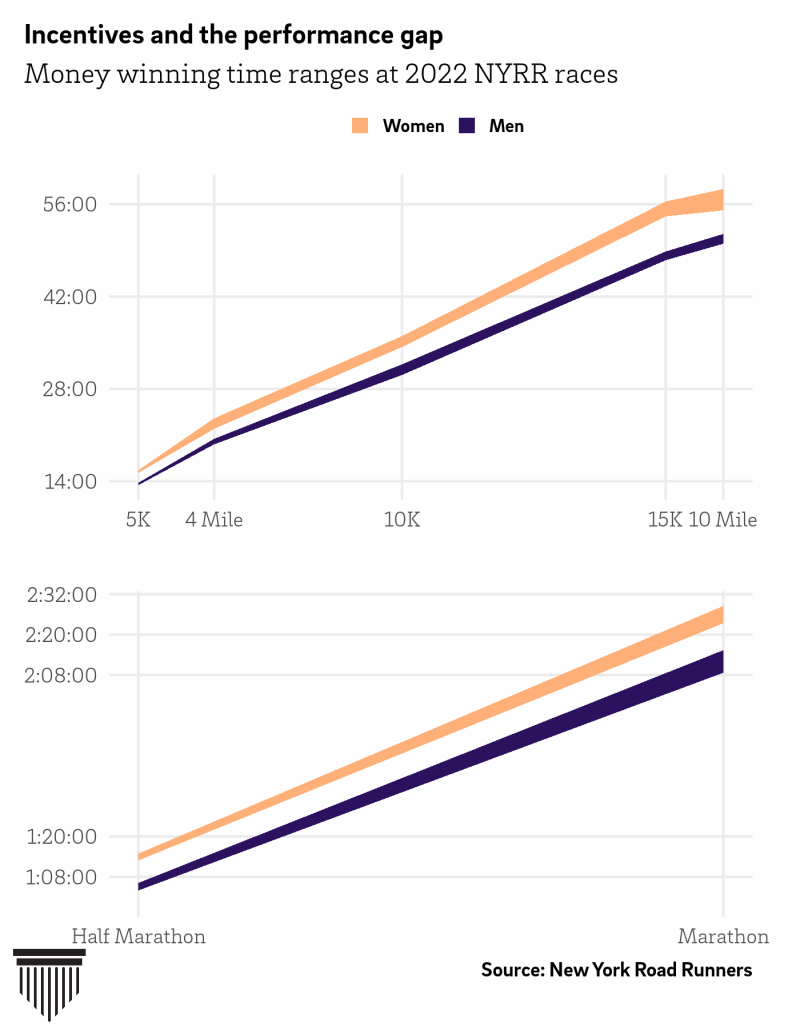 That leaves us with the crux of the issue when we’re talking not just about participation across or within two or more gender categories, but rewarding performances outside of men’s and women’s divisions.

Which will it be?

The top two NYRR non-binary money winners took home $11,900 and $6,500 in 2022, averaging out to approximately $1,490 and $925 per race. Some of our other research and analysis on salaries and earnings in track & field and other niche sports can provide some context to these amounts:

On the other hand, these dollar amounts are on par with the grants doled out by the larger track & field charities that specialize in keeping “pro” athletes on the dole. The motivations and finances of those organizations are as divorced from the industry or culture of professional sports as NYRR is when they pay a few grand for what is ultimately a mid-grade age group performance.

Whatever New York Road Runners thinks they are accomplishing by signaling their inclusivity for non-binary runners, prize money is inappropriate and inconsistent with those purposes.

Prize money is about performance, not participation, and is exclusive and exclusionary. Look at the first graph above to get a sense of the world class times that were excluded from prize money at this year’s TCS New York City Marathon. Scroll through the results to see the Olympians, World Championships competitors and assorted professionals excluded from the prize purse.

Sports business is the economics of performance

Track & field has its own money problems, and road running is creating a new one. One that will spread to the professional oval, while on a parallel path in other sports. The models presented by some of the largest organizations in TF/RR converge on a charity case. Donors, sponsors and administrators come away with a warm fuzzy feeling, and a small group of athletes finish the season with more money than hundreds of higher calibre athletes.

Money is information. You can figure out the significance of a 2:10 or 2:20 on a hilly course if you know what those times paid out. The difference between $100,000, $1,000 and $0 can tell an uninformed onlooker much of what they need to know about relative athletic performance.

They’ll also be able to draw a conclusion when they see two runners win the same amount for times separated by 32 minutes or more. Whatever that is, it’s not a system or culture based on performance, merit or sound incentives.

It’s not sport and it’s not business. No wonder no one confuses “pro” TF/RR for either.