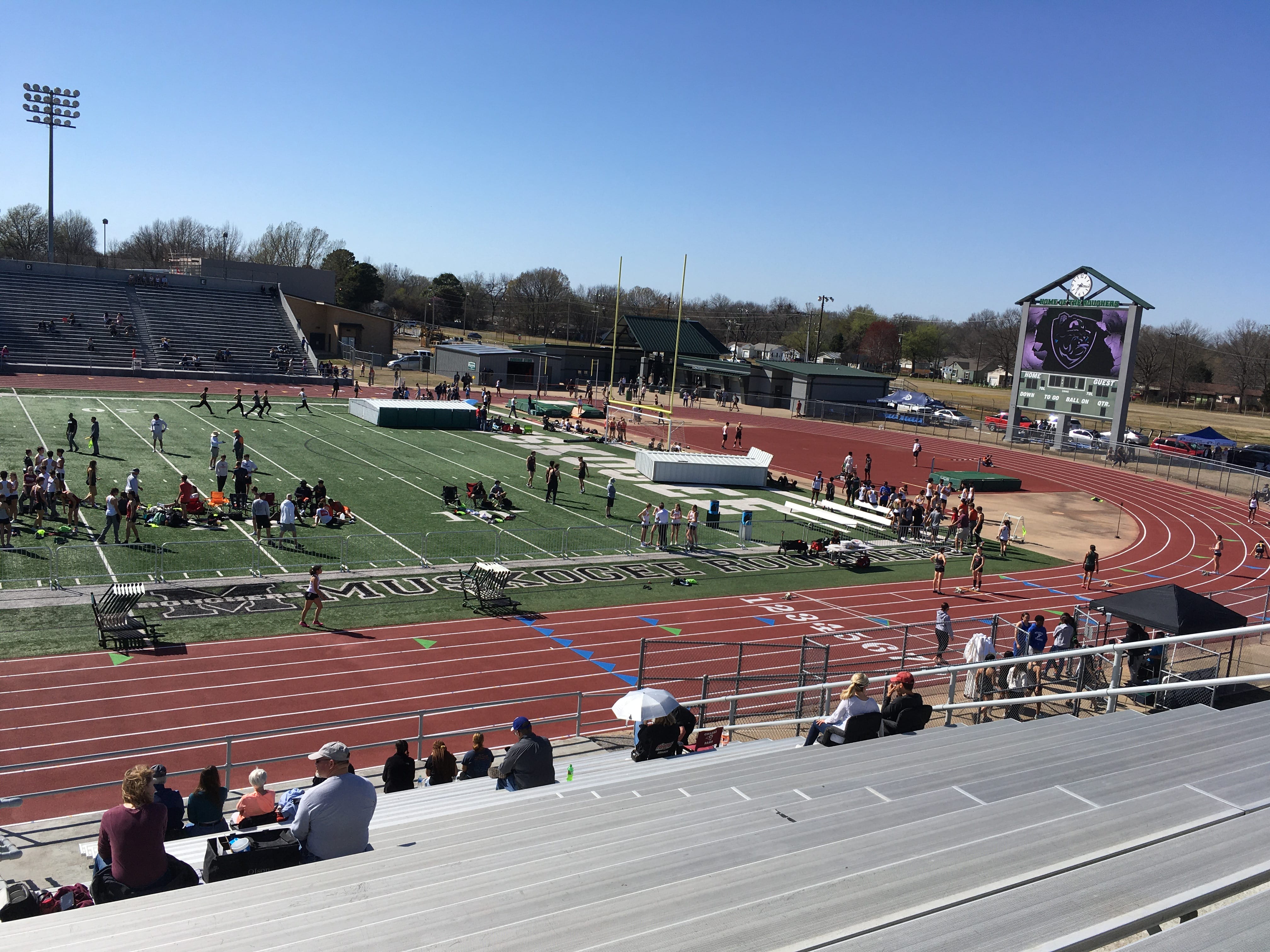 Travelling to track meets every weekend, as many of us do this time of year, gives us a chance to see a range of track & field facilities: from football stadiums built for 5,000 fans that have several times as many athletes as spectators on meet days, to standalone tracks with more (and more comfortable) seating in the grass than in the bleachers.

One thing that continues to stand out is just how much these facilities were built for the runners, for the track, with the field athletes and events an afterthought.

Take a look at the picture above. Beyond the left edge of the picture, behind the south end zone, are the jump pits. The throws circles, though? Those were behind and almost directly below us as we took that picture, outside the walls of the stadium at ///dame.loaf.voters and ///stones.delay.author, in a field across the street.

These detract from the fan and athlete experience, in a sport that already suffers on both counts. Fans have to make potentially either-or choices of what event to watch. If they want to see the discus, they might not be able to get back inside the track in time for the 800. If the shot put and pole vault are running concurrently, they can only watch one. The same goes for the athletes on the team: they may want to watch their friends or simply cheer on their teammates in as many events as possible. They’re either walking in and out of the stadium, or from one end of the facility to the other; or they just park themselves at the track near whatever field events are adjacent (probably the jump) to maximize the number of teammates they can watch. Sorry, throwers. Enjoy the peace & quiet outside.

The spectators – fans and teammates, alike – may also simply not know where the events they want to watch are taking place. When they get a text to come out and watch some of the throws, they have to find the throws circles first. If they have not been to that track before, will they know where to go?

That’s part of the reason we built our map showing the 3-word addresses of track & field facilities across the country. Fans and teammates should be able to know exactly where the throws and jumps action is happening, so they can get over there in time or simply know where to look.

Ideally, athletics facilities will be built with the whole sport in mind, so people can watch athletics instead of a smattering of the individual events of track & field. Of course, that doesn’t solve the problem of attention: as long as track & field is a three-ring circus, someone always runs the risk of missing a jump because they got caught up watching the shot put.

Our goal from the start has been to make it easy to be an athletics fan, athlete or coach. Knowing how field event facilities are often not visible from the track, the first goal was to give athletes and coaches a way to find places to train.

Then, after talking to a co-founder of “the AirBnB of tennis,” we saw the potential to be “the AirBnB of athletics”: a place where coaches and AD’s could put their tracks in the shop window to attract clubs, meets, events or any other revenue stream they could come up with.

The lack of events nationwide and prohibitions around such things in parts of the country last year drove us to take on the second leg of our overall strategy: data. Sports fans want to know every number around their sport. Few things make it as easy and fun to be a sports writer as the amount of free data out there when you need a story idea, and that makes it easy to be a fan because they have plenty to read, talk about and debate.

The only numbers that matter as much as performance outcomes are salaries. Since track & field athlete salaries are notoriously opaque (obligatory reminder that our e-mails are always open and anonymity assured), we went to where most of the money is in the sport: public universities. Want to know how much a Division II assistant coach at a public university focusing on jumps and hurdles makes in Missouri? Well, as long as someone meets that profile, we have the data.

Aside from being a conversation point, the salary data provides a baseline for what track & field coaches can expect to make. Anyone looking to start a club and hire a coach – the third leg of our overall ambition – will need to know this when running their financial projections, holding negotiations and making offers.

Soon, we will launch a similar explorer of athlete performance data. Whereas most other sports have a handful (or more) of sites where you can see goals, assists, tackles, yards per carry, fouls, non-penalty expected goals and the rest, track & field has no such thing. Before long, it will have one. More to come.

What would make athletics easier for you? Drop us a line and let us know.