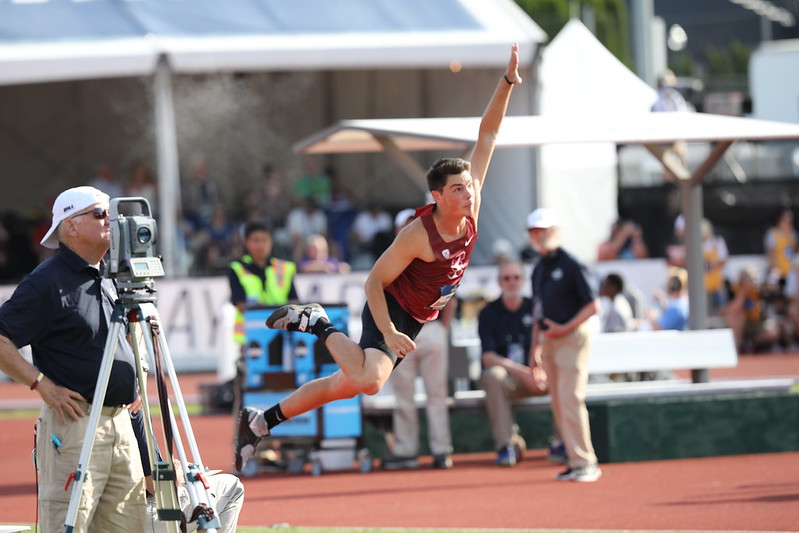 The NCAA is the biggest spender on track & field in the United States. Since they are not getting a financial return, are the top schools at least getting their money's worth in results?

Working in sports can be a road to wealth. Owning a sports team, on the other hand, starts with wealth and is often a road that leads away from it. Whatever reasons people have for buying or starting a sports team, getting rich is not among them.

The biggest “owner” of sports teams in the United States is the collegiate athletic system. For the non-revenue sports, such as track & field, colleges spend far more money than all other properties, owners and institutions combined. As the epithet implies, these programs are not there to make money, so the largest spenders have to measure their return in other ways, maybe even the same way real team owners measure success: titles and trophies.

Four of the 10 highest-spending schools in NCAA Division I track & field had a men’s or women’s program finish in the top five at the 2019 outdoor national championships. University of Arkansas, the biggest spender, clinched the men’s title, but they tied with LSU - who spent and lost $2.3 million less - for the highest tally of combined men’s and women’s points that year. University of Florida earned one fewer point than Arkansas and LSU, and did it for $1 million less than LSU.

As bad as Arkansas’s marginal spending was, at least they won a title and had success across both programs. The next three biggest spenders were University of Oklahoma, who paid $2.4 million for each of three points; University of Nebraska ($1.7 million per point); and the comparatively frugal University of Texas, at $140,192 per point for 46 points. Among the top 20 spenders, one failed to garner a single men’s or women’s point at the 2019 national championships: the recently, firmly cancelled program at Clemson University.

North Carolina A&T was the most efficient school of the 20 top combined point-getters. Their 15th place finishes in both the men’s and women’s championships cost them $48,000 per point. And they were one of the four programs in the top 20 to not run a budget deficit that year (Florida State, Brigham Young and University of New Mexico were the others).

Of the schools who competed at the 2019 Division II outdoor track & field championships, Grand Valley State spent the most, en route to third and fourth place finishes. We say “of the schools who competed” because LIU Post had the highest track & field spending in Division II - $2.8 million, a full million more than GVSU - but were not present (or at least not scored) at the championship meet (which is why we don’t have a little logo to put on the graph). 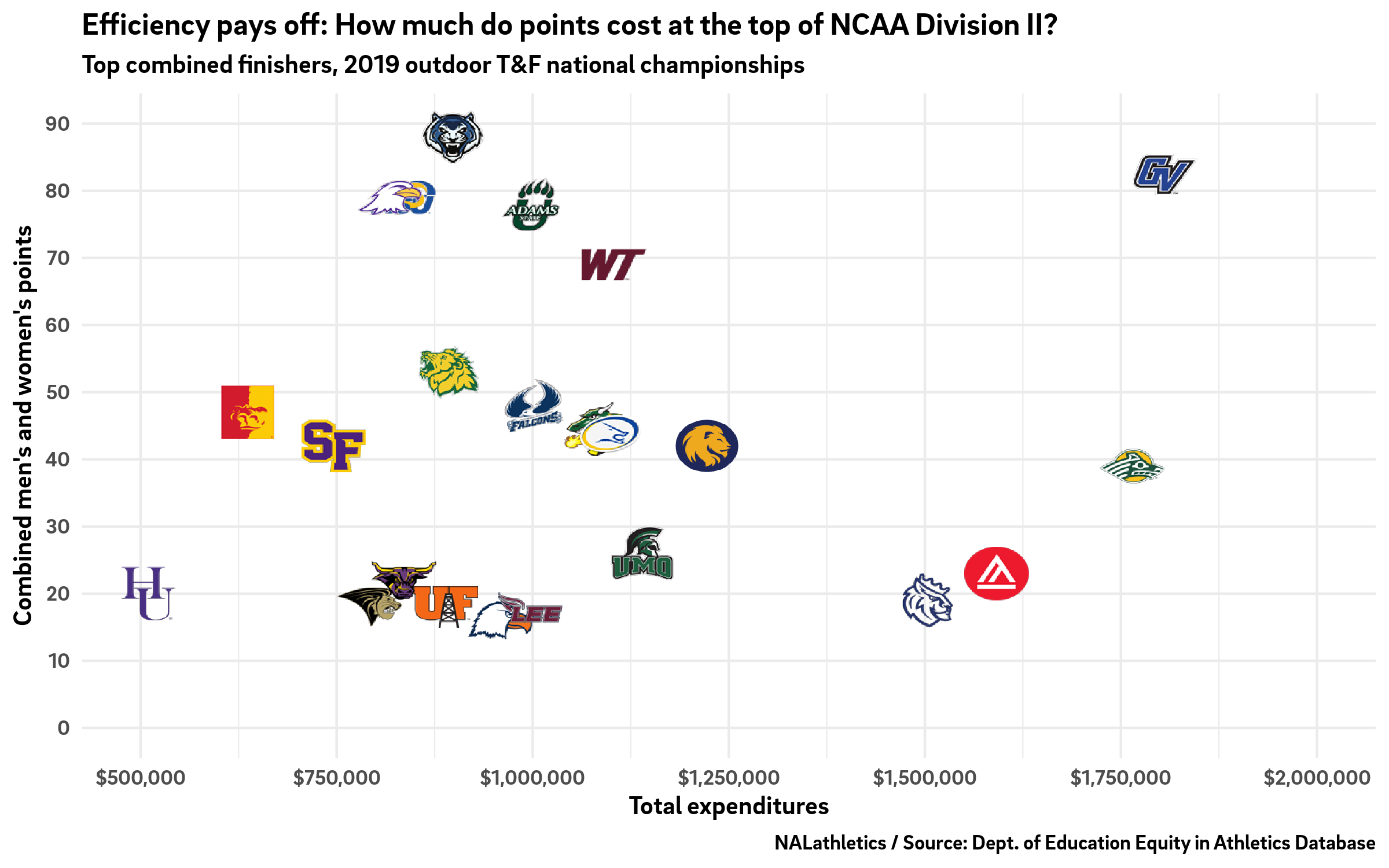 Perhaps reflecting the tighter budgets and culture of smarter spending at the Division II level, cost-effectiveness was rewarded more greatly than in Division I. Grand Valley State was the only one of the top five spenders to be among the top five combined points-earners.

Lincoln University spent half as much as GVSU and brought home six more points and a women’s title. Grand Valley’s edge over Ashland, Angelo State and Adams State came at about $200,000 per marginal point. And whereas the most efficient school in Division I was in the middle of the pack in the final tables, the most efficient schools in Division II were Lincoln and Ashland: $10,000 per point, less than 3% of the Division I top 20 average.

Unsurprisingly, the pattern continues as we move to Division III and NAIA (their championship results pages don’t have logos, so no graphs, sadly). University of Wisconsin-Eau Claire had the highest combined point total and a D-III men’s championship at $4,411 per point. Division III women’s champion Loras College paid a few hundred dollars more per point, and each school spent as much in a year as the average Division I top 20 school paid per point. And they managed to do it without going into the red: only one school in Division III’s top 20 ran at a loss, one of $15,000 at University of Wisconsin-Whitewater.

NAIA’s top two point-getters, Southern University at New Orleans and William Carey University, were also in the $4,000 per point range. The rest of the top 20, though, overall spent more about $10,000 more per point than in Division III.

Last year’s budget shortfalls led many college athletics departments to start asking “What are we getting from these non-revenue sports?” and the subsequent spree of program cuts prompted alumni and others to scramble for any possibly mollifying answer.

If track & field at any level has to become accountable for its accounting, well, last year’s cuts were a prelude. For the highest-spending schools, those for whom cutting track & field would have the greatest financial impact, scrutiny into their spending will lead to scrutiny into results.

The alternative to cutting a program may be demanding more success from the same or even reduced funding. If boosters and administrators are not willing to pay a few hundred thousand dollars for the marginal points at the top of the NCAA table (or the starters’ kit at the bottom, looking at you, Boomer Sooner), coaches may have to look outside of Division I to align their spending with results. Or, maybe, the people putting the money in will look outside the system entirely for something that offers a better financial picture along with sporting success.